Steve, the man in the video below was a gay Mormon man who belonged to the Evergreen International “gay conversion” program that TLC’s “My Husbands Not Gay” subject Preston “Pret” Dahlgren is the former chairman of .  After Evergreen shut down last year, Dahlgren joined North Star International – yet another such group – as a board member.

Jeff Bennion, another of the men profiled in “Not Gay,” is a spokesman for North Star.

None of this is mentioned in the TLC show. Which is a clear attempt to deceive the viewers.

Steve states that at least 1/3 of the people who were in his group have since committed suicide.

THIS is what TLC/Discovery channel calls “entertainment”.

Watch the video below and learn the TRUTH.


Tip of the hate to Ex-Gay Watch and Good As You.

The 2011 Emmy Award Nominations were announced this morning to the yawns of a few and the raised eyebrows of many.

HBO’s Mildred Pierce, the much uneeded, unwanted, and unwatched remake of the 1945 Joan Crawford classic somehow managed to nab  21 nods. It is named among Outstanding Miniseries or Movie nominees, with Kate Winslet is eying Outstanding Lead Actress in a Miniseries or a Movie and HBO’s other unwatched series “Boardwalk Empire” grabbing 18 nominations.

Meanwhile True Blood,  HBO’s most popular and highest rated series recieved only one nomination for Guest Star in a Drama going to Alfie Woodard.

The Walking Dead, AMC’s highest rated series evein the history of the network none.

This is gettin’ good.

According to ABC News, scientist have discovered a new strain of gonorrhea-causing bacteria that is resistant to antibiotic treatments.


“This is both an alarming and a predictable discovery,” lead researcher Magnus Unemo, professor at the Swedish Reference Laboratory for Pathogenic Neisseria in Örebro, Sweden, said in a statement. “Since antibiotics became the standard treatment for gonorrhea in the 1940s, this bacterium has shown a remarkable capacity to develop resistance mechanisms to all drugs introduced to control it.”

This is that latest in a long line of antibiotic resistant bacteria to make an appearance.

Cephalosporin-resistant Neisseria gonorrhoeae joins methicillin-resistant Staphylococcus aureus and vancomycin-resistant enterococci in a sinister class of bacteria known as superbugs. But unlike hospital-acquired MRSA and VRE, which spread where antibiotic use runs high and immune defenses run low, super gonorrhea could spread anywhere.

“This report points out that antibiotic resistance is occurring not only in hospitals, but out in the community,” said Dr. William Schaffner, chair of preventive medicine at Vanderbilt University Medical Center in Nashville, Tenn. And while the strain was disovered [sic] in Kyoto, Japan, antibiotic-resistant bacteria “don’t need a passport.”

The researchers, however, are quick to point out that they’re not certain if the strain has become widespread or is just a localized phenomenon.

This is good news…well good insofar-as the DoJ has decided not to fight this. It’s not, however, good news on the state of the country’s economy (that’s a post for a different blog).

From The Williamson Daily News and the Associated Press:

“The Department of Justice has informed bankruptcy courts that it will no longer seek dismissal of bankruptcy petitions filed jointly by same-sex debtors who are married under state law,” Schmaler said.

A former patient who sought help from the Christian counseling clinic owned by GOP presidential hopeful Michele Bachmann and her husband, Marcus, told ABC News he was advised that prayer could rid him of his homosexual urges and he could eventually be “re-oriented.”

“[One counselor’s] path for my therapy would be to read the Bible, pray to God that I would no longer be gay,” said Andrew Ramirez, who was 17-years-old at the time he sought help from Bachmann & Associates in suburban Minneapolis in 2004. “And God would forgive me if I were straight.” 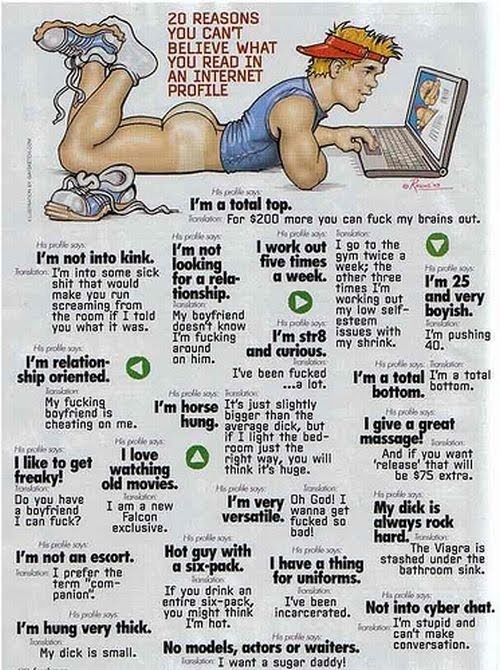 
There have been a number of great campaigns and charities that have recently emerged to show support to gay youth & teens. However, we noticed one significant niche missing in the efforts…. the message to the young, straight male. It’s an unfortunate reality that most of the bullying and harassment that gay teens face comes from them. It is for this reason that we are building a campaign that is primarily directed to the young, straight male by using comedy and their peers to positively influence their views on LGBT teens.

So, whether you like girls, you like guys, you like both, you like neither (well, you get the idea)…. what difference does it really make? There’s a whole lot more to a person than who they date. And yeah, we’re all different. But we believe that it’s those differences that make us interesting. Why would we all want to be exactly the same? Where’s the excitement in that?

Just be you. Cause that’s good enough for us.