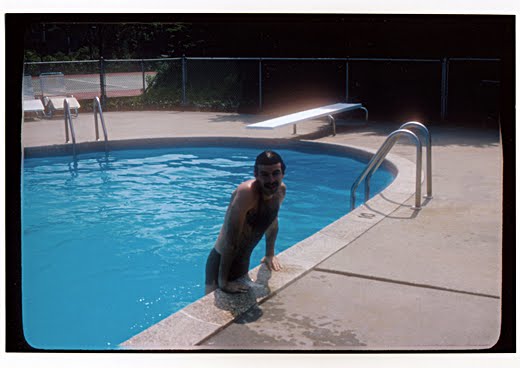 My first summer in my new apartment, 1967, I learned how to get to Riis Park, the gay beach in New York, known affectionately as “Screech Beach.” At that point, there were three places to go by the water in New York and be queer: Fire Island, difficult to get to; the Hampton, extremely snot-nosy and not yet invaded by share-houses; and Screech. Riis was a small slice of the Rockaways, bordered by Belle Harbor, Queens. You got there using the subway and a bus, so it was utterly democratic. Much of Riis at that time was still very old-school Queens-Jewish, until you got to Beach One and Beach Two, two sections of jetties that had somehow been colonized by queer factions. Even these had designations: one was very black and working-class lesbian, the other was for white guys, and then a third was for the lesbian allies of white guys.

Named for Jacob Riis, a pioneering photojournalist from the first decade of the twentieth century who captured tenement life in New York in a famous study called “How the Other Half Lives,” Riis was designed by Robert Moses as “the people’s beach,” and has a landmark Art Deco bathhouse, similar to its larger cousin at Jones Beach on Long Island, another Robert Moses gift to New York. Riis at the time of its building had the largest parking lot in the world, hard to believe but true. The park was designed to give working class New Yorkers a seaside playland of their own, since they couldn’t swim on the largely private beaches of Long Island and New Jersey.

What made Riis interesting was that it was extremely friendly. You could easily talk to 20 or 30 guys on the beach. Just being there was an act of defiance, and the cops regularly patrolled the boardwalk and sand to make sure no hanky-panky was going on. Zeroed in were guys who wore bathing suits that showed the cracks of their butts; you could be arrested for this, and hauled off in a paddy wagon. I actually saw this happen several times, and made sure that my suits covered this backside cleavage. Usually the guilty parties were either black or Latino, and their arrest by the cops would also be accompanied by the drama of people hissing and screaming at the police.

The cops would order back: “Shut up, or I’ll bring you in too.” But I don’t remember anyone else offering him or herself up for arrest 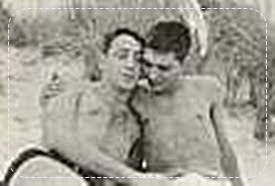 Another interesting ritual was that in this era when all information was difficult to come by, at precisely 4 o’ clock on weekends, hundreds of men would get up from their towels and blankets, and start parading at the water line, looking each other over and planning how the evening was going to be spent. Parties would be announced in whispers and passed on to suitable gents, or the name of a new bar, or a restaurant where people might gather with each other. Sometimes the hundreds easily became a thousand or more. It was like a large flock of water birds, chattering and preening each other. This would go on for an hour or so, then everyone would settle down again until it was time to leave, hit the showers, and prepare for what was going to go on later. (Picture at Left:  Rare photograph of Harvey Milk and lover Campbell taken at Riss Park.  Circa 1956)

Since I grew up in Savannah, Georgia, on the coast, I became a total Riis beach bunny. I can say that the happiest times I’ve had in my life have been on beaches, especially gay ones, and even more so nude ones. So, a few years into my first foray at Riis Park, I started going in, swimming up to a safe sand bar several dozen yards from the shore, and there taking my Speedo off and hanging it around my neck. I was the first guy to do this (I swear, no lie!) and soon many other gents did the same. It became a ritual of going to Riis. You were safe doing it, and by the year 1970, the cops were no longer arresting guys for showing their butt cracks (they had too many other things to worry about, what with the unrest from the Viet Nam War, and the fact that Stonewall had given gays and lesbians a new sense of their own empowerment).

One hot afternoon in early August of 1972, I was doing said thing when a tall, long-haired blond, very good looking man about 15 years older than I, swam over to me and started groping me. I was a bit startled (being at heart a slightly reserved Virgo who’ll do anything once he loses that reserve), but didn’t exactly turn away. He was kissing me in a very friendly manner, when suddenly three kids came up to him.

Daddy, isn’t it time to come in?” a little girl asked.

I was taken aback, but he agreed and asked me to return with him to his beach blanket. I did, and saw that he was exceedingly attractive, and had three children with him. They were his, and this was their first trip to Riis Park. We lay down on his blanket and he started making out with me, interrupted only to answer questions from his kids who seemed totally unfazed that their daddy was kissing a guy who was actually closer to their age than his. I asked his name.

He asked me to have dinner with him and his kids. I enjoyed his kids a lot, especially the two younger ones, and we started playing little word games and jokes together. In the car back from Riis, his youngest son Christopher who was seven suggested that since the next day they were going on a family vacation to Cape Cod they should take me along with them; like I was a puppy Christopher had just found and wanted to keep. Rebecca, Bruce’s daughter and middle child, also chimed in that I should go with them.

Bruce turned to me, and said, “That’s not a bad idea, Perry. Would you like to do that?”

I shrugged my shoulders and said, “Sure. Why not?”

I think it could only be described as part of the ethos of those times that after knowing Bruce Voeller only a few hours I could spend the next month with him and his three kids in a beautiful, seaside house in Truro, next to Provincetown. But at that point in my life I was used to such improvised unplanned things. I was living in a rent-controlled walk-up in Hell’s Kitchen, and had a roommate, a young woman who was a friend of my sister Nancy’s. So my apartment would be taken care of while I was away. I had just started going back to college at NYU, having scored a scholarship on a government program that stopped completely in the 1980s, and I took the idea that good-looking men might be taken with me fairly in stride.

The truth was, though, that Bruce had only been divorced from his wife of twelve years for a few months when Christopher asked him to take me to Cape Cod. And Christopher at 7 must have felt fairly ungrounded and was delighted that one of Daddy’s new friends was paying attention to him, too. On our first evening at the Cape, he asked me to sleep with him. I told him no.

“I’m going to sleep with your daddy instead.”

He gave up the idea and went back to his bedroom.

I can’t say that the month was all bliss. I mean, I hardly knew Bruce, and he seemed very autocratic at me; he was already a famous biologist at Rockefeller University, and before he had come out had personally known David Rockefeller, was a gold-medal equestrian athlete, and had been married to a successful surgeon, one of the first women in pediatric neurosurgery in the US. He had given up all of that to come out, once he joined GAA.

It was a strange, interesting, and difficult story. His oldest son, Jan, who was 11, and had been very adversely effected by the divorce, took an intense jealous dislike to me, and tried to drown me a couple of times. Since I was only 12 years older than he, he saw me as a terrible threat, but I couldn’t see that. The whole thing was a kind of magical situation, and I was happy to be with Bruce and his beautiful blond, very bright kids, and it all started at Riis Park.

A few years later, by 1975 or 76, the pretense of taking off your swim suit and hanging it over your neck in the water had changed to just no suit at all: Riis, at least the gay part, became nude. For a while. The only problem was that as gay women and the straight female friends of gay men started taking everything off, roving gangs of straight men started stalking them. The situation became tense and ugly. And so the sweet innocence of Screech Beach lost its appeal. By the end of the 1970s, a large part of its gay colony of water birds began to abandon it. We all went out to Jones Beach, on Long Island, or Fire Island, or other places. The time of hundreds of guys at Riis Park leaving their beach blankets at 4 pm to talk, schmooze, and cruise, was over.

Finally, Riis Park became part of the National Seashore, and all nudity was forbidden.

Two other wonderful asides about Riis that I’d love to share and remember: it had a great, kicky, wonderful bathhouse, with an amazing amount of cruising going on in it, but in a very friendly way. Since many Riis guys were living in the closet in Queens, going there was an act of coming out to them, and so finding men in the bath house was a nice part of their lives. The other was that every summer Sunday there would be a softball game in the baseball diamond behind the boardwalk facing the gay section. The softball ball game was often between the gays and the straights. I’m not sure where the “straights” came from, they might have been lifeguards, but this was probably the first example of organized gay sports in New York. It was great to watch, and several of my friends were on the gay team, a fact that as a non-sports guy, uncoordinate, left-handed sissy I found perfectly perplexing. The idea that gay guys could be baseball players or even sports fans was new to me. But I learned.

The Manly Art of Seduction, How to Meet, Talk To, and Become Intimate With Anyone.
“Honest. . . brilliant,”  –  Edge Magazine, Boston.

You can learn more about Perry Brass at his website, http://www.perrybrass.com/. You can order his new book The Manly Art of Seduction from Amazon.com in regular paper format or on Kindle. You can also learn more about his books at SmashWords, the complete Internet marketplace for all things EBooks and otherwise, and on his Author Page at Amazon. The Manly Art of Seduction was recently named a gold-medal winner of an IPPY Award for 2010, from Independent Publisher. It is also a finalist for a ForeWord Magazine Book of the Year Award.