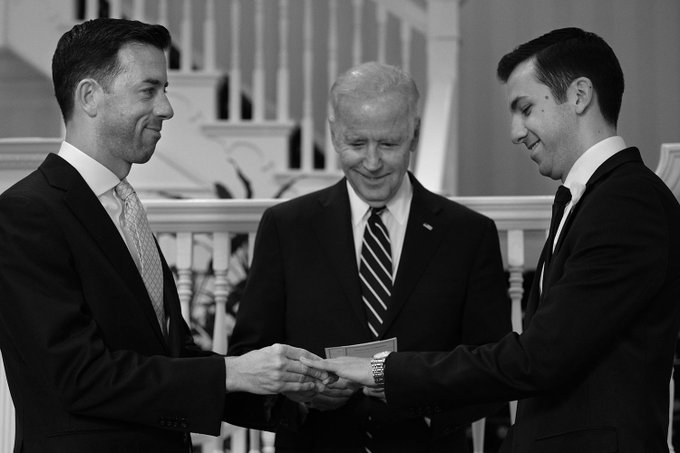 Its been a tough few months for Bryan Fischer of the American Family Association hate group.  There have been so many stark raving anti-gay idiots getting airtime Bryan has been lost in the jumbo sized bag of mixed nuts.

But today Fischer pulled out all the buttplugs and  invited his BLFB (Best Lunatic Fuck Buddy) Peter LaBarbera on to his radio program today so that LaBarbera could share his exhaustive “research” on which of the GOP presidential candidates claiming that they are insufficiently anti-gay and therefore should not receive the support of conservative Christian voters this primary season.

Fischer, of course, totally agreed. “If you have a biblical worldview, you’d be grieved for them,” he said. “You’d be grieved for what they’re heading into, grieved for the way in which homosexual behavior separates them from God, the risks that it’s putting them at, the risk that it’s going to put children to if they’re adopted into that household. So the proper response would not be joy, it would not be celebration; the proper Christian response would grief and sorrow over what these two people are doing to themselves and also to others

Brian Merucci and Bruce Morgan filed a lawsuit last year in U.S. District Court in Grand Rapids, MI in an effort to have the state recognize their 2013 marriage in New York state.

The couple sought legal fees from the state after the Supreme Court’s June 26 ruling declaring same-sex marriage legal in all states. But unlike other couples who asked for restitution of legal fees used to fight for their marital recognition Mr. Merucci and Mr. Morgan. Their case had then been on hold pending resolution of other cases before the high court.

Their attorney, Stephanie Myott, argued that the rulings in other cases by the Supreme Court compelled a ruling in her clients’ favor that includes an award of attorney fees and costs.

But the state is saying that the plaintiffs are not the “prevailing party.” And that the case is moot.

“Consequently, there is no need for this Court to provide Plaintiffs with relief to ‘modify’ Governor Snyder’s behavior in a way that directly benefits Plaintiffs. Instead, Plaintiffs’ marriage will be recognized by the State of Michigan without any intervention or relief from this Court. In the absence of any relief, Plaintiffs have failed to meet the ‘prevailing party’ threshold requirement and are not entitled to attorney’s fees “

The plaintiffs contend they would not have had to file the lawsuit if the state had recognized their marriage. They are seeking $34,325.

The Sixth Circuit Court of Appeals has once again denied Davis’s motion for a stay of the expanded injunction this time because her brilliant think-tank of bigot lawyers didn’t ask the district court first.

Now Davis and the anti-gay hate group the Liberty Counsel who are representing her needs to go back to the district court and ask there, get denied, and then come back to the 6th Circuit to ask again where they will in most probability be denied again.

You can’t make this stuff up.

The anti-gay politician has sent a letter to all 95 county clerks in Tennessee urging them to refuse to issue marriage licenses to same-sex couples and also claiming that the governor and attorney general are “bullying” county clerks into issue the licenses.

Womick is adamant the high court overstepped its legal bound.

“ Only Congress and state legislators have that power to create law. We will not be controlled by an oligarchy of five individuals in black robes,” Womick said. “If you really have a problem with that, you five justices, then come down to Tennessee and try to enforce your ruling.”

Womick is working with fellow crazed tea bagger bigot U.S. Rep. Scott DesJarlais to impeach those five Supreme Court Justiced and also co-sponsored TN HBHRJ0071, which “Proposes an amendment to the Constitution of Tennessee recognizing that our liberties do not come from governments, but from Almighty God, our Creator and Savior.” He also co-sponsored TN HB0615, which would have deemed The Holy Bible as the official state book of Tennessee

Womick sent his letter out by mail last Wednesday. So far, he has not received a response from any clerks indicating they would ignore the Supreme Court’s ruling.

Fifty-seven of Kentucky’s 120 county clerks have signed a letter asking Gov. Steve Beshear to call a special legislative session to address same-sex marriage licenses in the hopes of getting exemptions from issuing them to gay couples.

Many clerks “now face attempting to balance deeply held religious beliefs and job duties in the aftermath of the Supreme Court’s ruling in favor of same-sex marriage,” Lawrence County Clerk Chris Jobe and Boone County Clerk Kenny Brown said in a release about the letter.

Beshear said Tuesday, in response that clerks should follow the law, and any necessary minor changes could be addressed in the 2016 legislative session in January and that he will not be calling a special session.

Beshear said clerks should follow the law, and any necessary minor changes could be addressed in the 2016 legislative session in January.

The names of the clerks signing the letter were not made available at the time of this posting.

A note to the 57:  There is no need to waste taxpayers money on a special session. If your religious beliefs prevent you from conducting the duties required by your office, then you must resign.

A routine order issued by the Louisiana State Supreme Court on Tuesday transformed into a “opinion melee” among four of the court’s members,

The opinion of the court in Costanza v. Caldwell is a three-page order acknowledging that the Supreme Court has ruled that “the State of Louisiana may not bar same-sex couples from the civil effects of marriage on the same terms accorded to opposite-sex couples.” but onnce again haters had to hate and  four separate opinions were written by the court’s members with one of whom claimed that he is not obligated to follow the United States Supreme Court’s decisions.

Justice Jeannette Theriot Knoll, while conceding her obligation to follow the Supreme Court’s decision, wrote separately to complain about the “horrific impact these five lawyers have made on the democratic rights of the American people to define marriage and the rights stemming by operation of law there from.”

That prompted Justice John Weimer to retort that it is not a judge’s job to “point out what, in my view, the law should be.”

But it was  Justice Jefferson D. Hughes, III, who dissented from the court’s conclusion that it actually must comply by stating that “Judges instruct jurors every week not to surrender their honest convictions merely to reach agreement,” Hughes began. “I cannot do so now.”

Hughes’s cites no authorities and provides no legal arguments in support of his position. But has no problem suggesting that the reason for his opinion is that gay parents are pedophiles. “This case involves an adoption,” he writes, adding that “[t]he most troubling prospect of same sex marriage is the adoption by same sex partners of a young child of the same sex.”

Both Hughes and Tony Perkins, President of the anti-gay hate group the Family Research Council both ran together on the Republican ticket in the 2002 Louisianan State election.

We haven’t been posting much about Mat “I was an accessory to a kidnapping” Staver and Matt “Bam-Bam” Barber of the Liberty Counsel as of late because unfortunately there are far too many Religious Morons and Anti-Gay Idiots and not enough time.

Thankfully we have Right Wing Watch which reports that Staver and Barber are quaking in their sanctimonious pink satin panties and saying the push for gay marriage is “satanic” and will bring god’s wrath upon the good ole’ U.S.A.

“When you put two men together within the same-sex agenda, it is not about the institution of marriage; it is about having the protection, the legal status, it’s about using that as a hammer to crush anyone who believes in objective reality, marriage reality, that it is the union of a man and a woman, anyone who believes in human sexuality between a man and a woman and that there are certain limits to moral boundaries that we shouldn’t cross and that certain limits are on human sexuality. They literally want to ultimately destroy the institution [of marriage]. This is literally a satanic attack, in my view, and there’s no question about it.”

Barber added to the fear mongering dogma, saying “the whole idea of marriage equality is nothing more than a push to gain the official government sanction on evil.

From Lambda Legal. One of the few LGBT organizations actually worth their salt.

Coming right on the heels of Jeb Bush’s most recent Christo-fascist pandering saying that he doesn’t believe that same-sex marriage is a constitutional right and that traditional marriage is central to Catholicism. Now it comes to life that Jeb-thro Bro-dine in an interview with the Christian Broadcasting Network, has said that he believes that Christian business owners should have the right to refuse service to gay people based on their religious beliefs.

“This is more about the vendor issue as it relates to do they want to provide a service for same-sex weddings. Are you OK if they don’t provide those types of services? Is that OK?”.

“A big country, a tolerant country ought to be able to figure out the difference between discriminating someone because of their sexual orientation and not forcing someone to participate in a wedding that they find goes against their moral beliefs,”

It’s too bad those very high and Catholic Bush morals didn’t stop his brother from invading Iraq that resulted in the deaths of over 123.000 innocent Iraqi men, women. and children