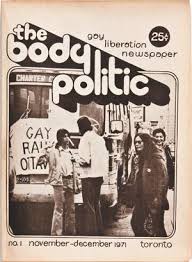 January 5, 1925 – Nellie Tayloe Ross of Wyoming became the first female governor inaugurated in the U.S. She may not have been a lesbian, but she was one of the first feminists to gain political office.

January 5, 1977 – The Lesbian Organization of Toronto moves to new center at 342 Jarvis Street, sharing with feminist publication The Other Woman and coffeehouse called Three of Cups.

In 1978 the Toronto Police brought charges against The Body Politic/Pink Triangle Press (which is still in existance today and specializes in LGBT media including publishing, online interactive media, and television and the LGBT magazine, Xtra! ) was charged with “publishing immoral, indecent and scurrilous material” because of an issue of The Body Politic which included Gerald Hannon‘s article “Men Loving Boys Loving Men” under Criminal Code section 159 (“possession of obscene material for distribution”) and section 164 (“use of the mails for purpose of transmitting anything that is indecent, immoral or scurrilous”).

In 1987 The 135th, and final, issue of The Body Politic is released in February.  The new publication Xtra  is released adapting to changing times and the void left by The Body Politic, the paper becomes increasingly politicized. Xtra becomes a place for discussion about the defeat of Ontario NDP Bill 167, criminalization of HIV/AIDS, and the censorship struggles of Vancouver’s Little Sister’s and Toronto’s Glad Day queer bookstores.