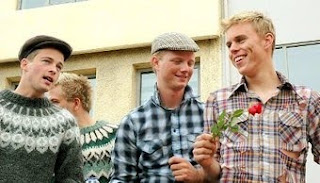 Iceland’s tiny, frozen, broke-ass, gay-friendly island nation’s parliament voted 49-0 today to add “man and man” and “woman and woman” to their existing marriage laws. And to me it looks like the most beautiful country in the world.

“The Althingi parliament voted 49 to zero to change the wording of marriage legislation to include matrimony between ‘man and man, woman and woman,’ in addition to unions between men and women. Iceland, a socially tolerant island nation of about 320,000 people, became the first country to elect an openly gay head of state in 2009 when Social Democrat Johanna Sigurdardottir became prime minister after being nominated by her party…Iceland’s protestant church has yet to decide whether to allow same-sex marriages in church, although the law says ‘ministers will always be free to perform (gay) marriage ceremonies, but never obliged to.'”

How do I change my citizenship? An influx of gay immigrants will definately help their economy recover!

(Oh, and case anyone was curious, that photo is from Iceland Gay Pride 2006 so yes the men do look like that there!)