For weeks now for better or worse this website has been posting recaps of AHS-NYC (which is easier said than done.) Well imagine my surprise when I finally finished eps 7 & 8 and I posted to my personal Will Kohler Facebook/META (whatever) account and get a warning that the AHS NYC graphic being “pornography”. I contested and won and my post was replaced and my account was fine. So I go to my Back2Stonewall Facebook account and post the recap. Same thing! A warning about the AHS NYC graphic being “pornography”. Well I contest the decision on this account. ON THIS ACCOUNT IT IS PORNOGRAPHIC AND THEY RESTRICTED ME FOR 6 DAYS.

So we have AHS-NYC RECAP:  Episodes 7 (“THE SENTINEL”) and 8 (“‘FIRE ISLAND’”) SPOILER ALERT! up and viewable at my Will Kohler’s FB page, and banned and restricted on the Back2Stonewall.com FB page and I can’t post at all for 6 days. The only difference between the two pages is one is personal and Back2tonewall is a dedicated gay FB news webpage. I’m not saying homophobia has anything to do with it but it might. Or it just could be FB has really bad employees’ who don’t do their job properly or perhaps let personal feelings into their decisions. But whatever it is Facebook/META has gotten just as bad as Twitter and the LGBT community needs it’s own viable social media platform.

This has gotten entirely out of hand.

I should sue or send Big Daddy after them.

See you in 5 days on Facebook just in time for the AHS-NYC Finale Recap and then probably banning!~

Not LITERALLY. Dang it!  (Although I am sure that there’s a hit horror movie in there somewhere.)

But it does seem that those The Tea Bagging Montana folk of Montana’s Big Sky Tea Party Association are in a world of turmoil after the removal of Tim Ravndal as its President, following his remarks on Facebook condoning violence against gay people namely “hanging fruits”

Turns out some die hard members are still backing Ravndal and the board chair is finding himself having to defend the group’s vote to dismiss him.

At a frequently contentious meeting, many of the approximately 30 members in attendance blasted acting board chairman Roger Nummerdor and chairman Jim Walker — absent because he’s hunting in the Crazy Moutains — for stripping Ravndal of his position and membership without giving him a chance to defend himself, and for announcing the move to the press over the Labor Day weekend. In the end, Nummerdor said the available board members would meet soon to consider reinstating Ravndal’s association membership, although he did not specify a date for that meeting.”

Ravndal was hunting in the “Crazy Mountains”?  How apt.

Roger Nummerdor the Big Sky Tea Party chair has said that many of Ravndals supporters are saying that Ravndal’s comments were manipulated by liberal and gay-rights groups and the media, and most said the image problem was exacerbated by the quick board action.  But Nummerdor himself has stated that the “Shepard story occurred to him as soon as he read about Wyoming and hanging fruits.” in the post even though Ravndal has said that he didn’t realize the implications of the Facebook comment he was responding to.

Add to that the fact yesterday, another member of the Tea Party and a GOP candidate for the Montana House, Kristi Allen-Gailusha, declared “war” on the gay community in Ravndal’s defense and it seems followers of the Tea Party have come out of the closet, sort to speak.. The TP higher ups have for over a year back peddled away from signs that the party was hate based but finally their own is coming out to show that hate and intolerance is the foundation of the party and eat their own.

Looks like  we got a whole lot of trouble up at Crazy Mountain! 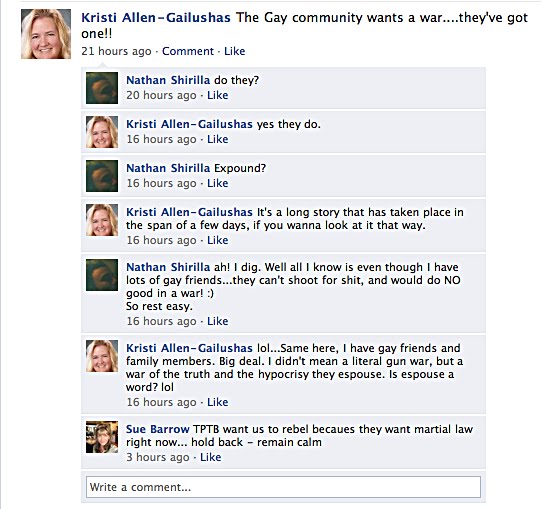 As posted here yesterday, Montana’s Big Sky Tea Party President, Tim Ravndal who posted on his Facebook page that marriage should be “between a man and a women” and then went on to agree and condone with another commenter’s post for violence against homosexuals referring to the Matthew Sheperd murder and “hanging fruits” has apologized.  (See the screenshot from the Facebook page which has since been removed by CLICKING HERE.)

Tim Ravndal: “Marriage is between a man and a woman period! By giving rights to those otherwise would be a violation of the constitution and my own rights”
Keith Baker: “How dare you exercise your First Amendment Rights?”

Dennis Scranton: “I think fruits are decorative. Hang up where they can be seen and appreciated. Call Wyoming for display instructions.”

Tim Ravndal: “@Kieth, OOPS I forgot this aint(sic) America no more! @ Dennis, Where can I get that Wyoming printed instruction manual?”

Dennis Scranton: “Should be able to get info Gazette archives. Maybe even an illustration. Go back a bit over ten years.”

Ravndal apologized for the post, saying he “never made the connection” to Shepard’s murder until after national bloggers picked up on it and his phone started ringing earlier this week. “I wasn’t even thinking about the tragedy that happened in Wyoming,” Ravndal said. “I made a mistake and I apologize to anyone I offended. I do not condone violence to any human being.” Ravndal also said his Facebook page is personal, and has nothing to do with the Big Sky Tea Party Association

Know what Tim?  I’m calling BULLSHIT and I am also calling you a LIAR!

First off right before you issued your apology you posted this on your Facebook page ranting against “Political Correctness” kind of proving its all lip service.

Secondly I might, just MIGHT believe that you didn’t make the connection to the Matthew Shepard murder mostly because you probably have the IQ of a watermelon.  But I cannot believe that you did not see the violent connotation of “hanging fruit” and then you asked for a manual on how to do it. YOU are not that stupid and WE are not that stupid.
As for your Facebook page being “personal”.  It’s NOT personal when you use it to preach to others in your group and you have it set to “open” status.
You sir, are nothing more than a hateful, homophobic, moron.  Pure and simple and typify everything that the Tea Party stands for.
So in other words Timmy…..
FUCK YOU ASSHOLE!
[source]

Tim Ravndal, (pictured left) is the President of Montana’s Big Sky Tea Party Association, he also is a homopobic hateful asshole who condones violence against homosexuals.

Ravndal, posted on the Tea Party Page that marriage should be between a man and a woman.  (I don;t know whay the Tea Party after all doesn’t get into those issues, so they say.)

Then Ravndal expressed support for a commenter who in an obvious reference to the Matthew Shepard murder) said, “I think fruits are decorative. Hang up where they can be seen and appreciated. Call Wyoming for display instructions.”

Ravndal response: “Where can I get that Wyoming printed instruction manual?”

I wonder  if  Ravandel and the guy who want to decorate the landscape with hanging fruits would be interested in pulling thier dicks out of the livestock long enough to take on a living, breathing fag one-on-one in a closed room with no weapons. 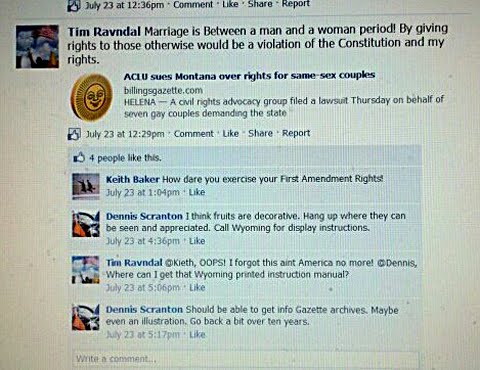