Clear thinker, Sex advice columnist and all-around positive influence Dan Savage hit the nail on the head today and shined a light on an important subplot in this ordeal, overlooked by those too transfixed by the salacious and damning info about Rekers. In a post entitled “Let’s Not Chew This One Up and Spit Him Out,” Savage implores that we “demand that one of the big gay orgs–HRC, Lambda Legal, NCLR–steps up and provides [“rentboy”] Jo-Vanni Roman (Lucien) with the lawyer and the advisors he needs.”

Let’s not treat this kid, who is just 20, like he’s done something wrong, or like he’s an embarrassment to the gay rights movement because–gasp–he was doing sex work, as has been reported, to pay his college tuition. This kind of hypocrisy–Haggard’s kind, Craig’s kind, Rekers’ kind–needs to be exposed. And it’s likelier to be exposed if the people who bring it to light aren’t treated like pariahs and are instead offered real and tangible support.

I am SO with Dan on this one.  (Actually I’d like to be ON Dan but he is married after all)

Remember Mike Jones?  The escort who came forward to spill the beans on his liason’s with Ted Haggard?  Some in the communitywere not exactly kind to Jones and concentrated on his profession instead of the bravery and aacyual great deed that he did by coming forward and exposing Haggard.

Let’s not let that happen again.

Found this in my Inbox this morning…….

This week an anti-gay activist and family values crusader named George Rekers was caught by the Miami New Times returning from a vacation with a rentboy, and the story has turned into an international media circus, with coverage on CNN, Colbert Report, BBC, The Daily Show, The Tonight Show and the blogosphere. We were completely surprised by this turn of events and we are following it closely. At rentboy.com, it is our policy to protect the privacy of any escort advertising his services on our site–the same goes for clients. Information exchanged between consenting adults meeting on our remains private. Mr.Rekers has built a highly public, lucrative career out of shaming gay men and women. If it is true that he took a rentboy “on vacation,” then he has brought this negative attention on himself. We reserve judgment, we don’t know all the facts.

Just to be clear, Rentboy.com is not an escort agency, we are an ad listing service for male escorts, where men place their own ads and work for themselves, so that clients can contact them directly. Our mission is to create a non-judgmental space where anyone curious about exploring male-male companionship can hire a man by the hour. We remain open-minded and devoted to privacy for the people who use our site, but we can’t take the risk out of leading a double life, or having a closeted or hypocritical career… If you’re a famous heterosexual homophobe and you appear in public with a rentboy with your pants down, you’re just asking for trouble

*  Dr. George Allan Rekers, in a letter written to the Miami Herald’s LGBT issues blogger, Steve Rothaus, is threatening a lawsuit against the Miami New Times for calling him a homo!

If today’s news story in the Miami New Times is accurate, I have been advised to retain the services of a defamation attorney in this matter, because the fact is that I am not gay and never have been.  Blah….blah… blah

Rekers goes on to recount the phone call, using the expression “life my luggage” six times. *CHORTLE*. Me think the bitch doth protest too much..

*  Jo-Vanni Roman (Luicen)  finally speaks out on Rekers.  Jo-Vanni confirmes the “anus long-stroking” technique reported by the Miami New Times.  Saying that that Rekers’ cock was “rock hard” during the massages. (Ewwwww) “He was definitely totally gay for me.”

* A second male escort, who goes by the name Chaz, is now claiming he was hired by Rekers for sex:

*  The Miami New Times listened in on a speakerphone call between  George Alan Rekers and Jo-vanni (Lucien) Roman who accompanied him on his vacation:  “During that talk — which took place at about 1 a.m. Thursday in a Fort Lauderdale home — Rekers told Lucien several times not to talk to the press. He also never challenged two statements by Lucien: 1) that the minister had found the 20-year-old escort on an internet site, and 2) that they ‘did the whole massage thing,’ referring to Lucien’s contention that he gave Rekers nude massages during their two-week trip to Europe.”  Rekers assured that if the escort just remained silent, the whole story would soon die down. He began muttering darkly about “activists with an axe to grind” and “nothing better to do.” (FUCK YOU BITCH!) “Sometimes I feel like I should just tell [the press] what happened on the trip.” Jo-Vanni sais  “No,” said Rekers quickly, “Please don’t do that. Please don’t let them pressure you into it.”

I tell you this story is the gift that keeps on giving!

*  YouTubers sound off on Rekers! 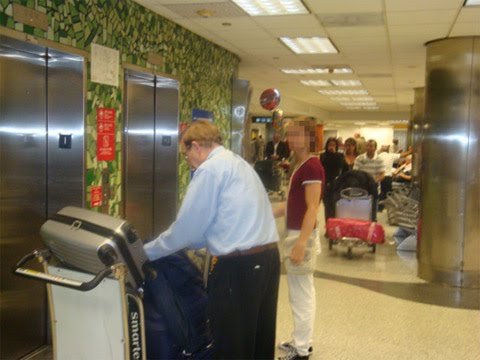 In 1983 George Allan Rekers helped James Dobson found the Family Research Council.  He has served as “advisory roles with Congress, the White House, and the Department of Health and Human Services and testifying as a state’s witness in favor of Florida’s gay adoption ban,” and “is a board member of the National Association for Research & Therapy of Homosexuality,” and “lectures worldwide, from Europe to the Middle East, on teen sexuality.”

Renker is an uber-conservative Baptist minister in Miami. He’s a raging anti-gay activist.  And he just returned from a sun-filled 10-day trip to Bermuda with his rentboy!

On April 13, the “rent boy” (whom we’ll call Lucien) arrived at Miami International Airport on Iberian Airlines Flight 6123, after a ten-day, fully subsidized trip to Europe. He was soon followed out of customs by an old man with an atavistic mustache and a desperate blond comb-over, pushing an overburdened baggage cart. That man was George Alan Rekers, of North Miami — the callboy’s client and, as it happens, one of America’s most prominent anti-gay activists. Rekers, a Baptist minister who is a leading scholar for the Christian right, left the terminal with his gay escort, looking a bit discomfited when a picture of the two was snapped with a hot-pink digital camera.

Rekers, in an interesting move, is answering a reporter’s phone calls. He says he hired the rentboy, who the Times dubbed “Lucien,” to help with his luggage, because he just had surgery and cannot lift his bags; he did manage to push his luggage cart. But he didn’t deny he met Lucien on Rentboy.com, where his profile describes his “smooth, sweet, tight ass” and “perfectly built 8 inch cock (uncut)” and notes he is “wild” and “up for anything.” Lucien, however, did confirm that’s how they met.

Rekker must think everyone hires thier help from escort sites. Need an electrician? Need a nanny? Need a piano teacher? Clearly one of the enterprising young men at Rentboy.com should be your first choice.