The Stonewall Veterans Association, which was formed in the aftermath of the Stonewall riots in 1969 by those who fought and were involved in the 4 nights of rioting are insulted that Cynthia Nixon launched her gubernatorial campaign with a fund-raiser at the Stonewall Inn on Wednesday without any recognition of the history or the group that many say started the fight for our civil rights.

Williamson L. Henderson, the Stonewall Veterans Association director has said that Nixon “Is ripping off gay history to promote herself.”

The group which boasts roughly about 40 surviving members of that historic night has been subbed by Nixon before.  At a  2013 campaign event at the Stonewall she stumped for Mayor de Blasio with a dozen Stonewall vets in the front row.

“It’ll be five years in June, they (Nixon and her companions) were on a little stage that was about 2-feet high for show … they never even acknowledged us,” he said. “She was talking about gay rights, gay pride, and there were a dozen of us there. Fast forward to the other night — she doesn’t invite the Stonewall Veterans?”

Nixon, who was 3 years old at the time, also prides herself as an advocate for LGBT rights and spoke about the challenges LGBT people face under the Trump administration at the fundraiser. “Being queer and being visible has been one of the unexpected joys of my life. And I must say, as a community, we’re at a thorny moment in our LGBTQ journey,” she said. We may have repealed Don’t Ask, Don’t Tell and passed marriage equality, but, the sun is not shining equally on all of us. Queer people who are also African-American or Muslim or Latino or working class are being targeted brutally on a daily basis.”

Williamson and the SV’s were further enraged after watching the coverage of Nixon’s event where it was reported supporters who contributed as little as $1 could attend.

Ironically $1 was the same cost of admission to the Stonewall inn in 1969.

Sex in the City star Cynthia Nixon has been a strong activist since coming out several years. In particular, Nixon has put a lot of time and dedication into providing education and prevention of the spread of HIV/AIDS as well as talking  about the lives that are affected by the virus. In a recent interview, Nixon talks about how she came to understand the nature of this epidemic and how it impacts all of our lives. When she was asked about Hollywood and how they seem to have taken more interest of HIV/AIDS and it’s impact she had this to say:

There are a lot of reasons. First, there are so many gay people in these industries, historically. Show business is a world of people who feel like they’re different, in whatever way. Individuality is encouraged. Being gay is accepted. And gay-positive people who identify with being different feel a lot of simpatico for LGBT people. I also feel like in terms of theater and the arts community in general, there is such a strong river of gayness running through it. We would not have these rich literary and artistic cultures without gay people like Gertrude Stein and Oscar Wilde, and straight people acknowledge that and pay tribute to it. Plus, the work in the artistic community often focuses on speaking the truth, and the truth is there are gay people, there have always been gay people, and they have generally been treated pretty badly. Many people in the arts community think that truth should be told, rather than papering over it to maintain the status quo.

I highly recommend you all read the rest of this personal interview in which Nixon tells a touching story of two of her friends affected by the virus and how it affected her life as well as her family.

This has been another hectic week so here’s a quick repost from HuffPo:

The “Sex and the City” star, 46, will reportedly receive the award as part of Yale University GALA Lesbian Gay Bisexual Transgender Alumni Association’s Reunion Weekend. Although the weekend itself has been postponed in the wake of Winter Storm Nemo, Nixon is still currently slated to receive her award at a special Feb. 8 concert, where she will be serenaded by the Yale Whiffenpoofs, the university’s legendary all-male a cappella group.

Nixon will be the inaugural recipient of the award, will be presented annually to artists “who have demonstrated a strong commitment to the lesbian, gay, bisexual and transgender community,” according to a press release.

In an email statement, Nixon said she was “incredibly honored” by the Yale award. Given that the actress is a Barnard graduate, she added, “I am looking especially forward to hearing the Whiffenpoofs, although I will feel a twinge of rivalry on behalf of the Columbia Kingsmen and the Barnard Bacchantae.”

It’s always nice to recognize the people that serves ass inspiration to our community. Through roles, activism and discussion it helps foster understanding.  Congratulations Cynthia on your award!

In an example of what happens when you let “celebrities” speak unfetted for a socil and civil movements actress Sex In The City’s Cynthia Nixon recently described herself as “gay by choice” in a New York Times magazine interview, and set off a storm of reexaminations of the evidence on whether homosexuality is a matter of nature or nurture, and threw a verbal monkey wrench into the legal question of gay rights..

“‘I’ve been straight and I’ve been gay, and gay is better.’ And they tried to get me to change it, because they said it implies that homosexuality can be a choice. And for me, it is a choice and you don’t get to define my gayness for me. A certain section of our community is very concerned that it not be seen as a choice, because if it’s a choice, then we could opt out. I say it doesn’t matter if we flew here or we swam here, it matters that we are here and we are one group and let us stop trying to make a litmus test for who is considered gay and who is not.”

Well Cynthia “you don’t get to define my gayness for me” either or anyone else in the LGBT community for that fact so why even discuss it in the New York Times?

Alot of Cynthia’s misguided talk might have to do with the simple fact that women have an easier time choosing which sex they enjoy intercourse with more than gay men does and and that just comes down to biological plumbing. No really think about it. Even if a woman was not attracted to a man she could still have sex with them and try it. But a gay man who is not attracted to women physically is unable to and enjoy it so there is no choice so they are truly born gay.

If Nixon is BI thats fine and THAT is her choice. If she is BI and  leans to women that is THAT is your choice also.  But many of us aren’t and she should not be speaking out for a community on a subject that is so potically charged especially when her biggest claim to fame is getting advice from Carrie Bradshaw.

Miranda, I mean Nixon needs to learn how to choose her words better, because she fell into a right-wing trap, willingly. When the religious right says it’s a choice, they mean you quite literally choose your sexual orientation, you can change it at will, and that’s bull.

Of course she is speaking for HERSELF but as a spokesperson for the LGBT Community which she became when she started fighting for marriage equality in New York she should choose her words thoughtfully and carefully.

Sexual orientation is far more complex than laying on a bed and spreading your legs with a man or a women and picking which one that you like best.  And in reality that is much easier for a woman to do with both sexes than a gay man. And when you say things like “being gay is a choice” and using incendiary buzzwords that don’t really mean what you’re trying to say – when you try to define the rest of us by your incredibly poorly chosen, and incorrect, words – you hurt us all by just giving ammunition to the enemy

*  Today at a White House meeting with veterans to discuss the repeal of Don’t Ask, Don’t Tell , at the end, the “official statement” is that the “The President is aggravated and frustrated with the slow pace of repeal.” Really? As if the President has no role in it. Wow too bad he has no power.
*  Cynthia Nixon says her fiance’ is  “basically a short man with boobs.”

*  The “dick slang” dance is SO TOTALLY NOT GAY.

*  The best part of last night’s Desperate Housewives was the preview for Grey’s Anatomy, featuring Eric Dane’s anatomy.  McSteamy is BACK! 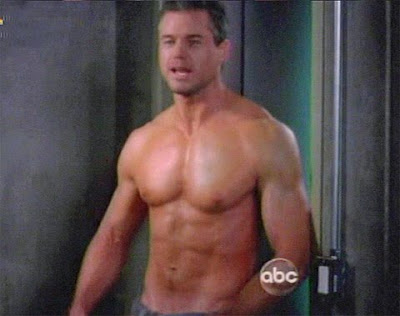