Amazon.com’s Deal of the Day is the ultimate for any gay geek!

Thats right, Buffy the Vampire Slayer: The Complete Series Seasons 1-7, you can have the estimable pleasure of watching 6480 minutes and a near-decade of Buffy episodes whenever you want without commercials and be able to freeze frame shirtless David Boreanaz

Loaded with extras, this collection contains all seven butt-kicking season of Buffy the Vampire Slayer on 39 discs at 70% off its regular price of $139.99 and available today only for $59.99.

And by using this link ——-> Buffy the Vampire Slayer: The Complete Series

you will be able to help Back2Stonewall.com  continue on fighting the BIG EVIL ANTI-GAY BAD and we’ll receive a 4% commission on every Buffy set sold.

If you grew up in the 90s then you were most likely a fan of the supernatural hit Buffy the Vampire Slayer. How could you not with the well drawn out plot that had an even greater knack for well developed,fully fleshed out characters. And none of them (at least in my opinion) were as well developed and in depth as the Sunnydale’s resident witch, Willow Rosenberg.

We saw Willow, who was at first the quiet mouse, bookworm who was ever so resourceful sidekick to Buffy, the town of Sunnydale’s champion vampire slayer, become a kickass witch that by the end of the series had become much stronger than Buffy herself. willow dealt with addiction and narcissism, then rage brought n by extreme grief. But what was the most compelling thing about about Willow was not that by the middle of the series was discovering that she was a lesbian, but that it did define her. It was important at some point in the plot but her story never felt like a talking point which ironically made her story of being a young woman discovering her sexuality all the more compelling.

Alyson Hannigan, who portrayed the character of Willow throughout the series reflected a bit on her character and what playing the role meant for her and fans as well who may identify with coming to terms with their sexuality. Here’s more:

“How I Met Your Mother” star Alyson Hannigan spoke at length about her “Buffy the Vampire Slayer” days in an interview with HuffPost Live, recalling her character’s groundbreaking lesbian relationship.

“I was so grateful to have been a part of such a wonderful relationship,” Hannigan, 39, said of Willow and Tara. “The people that it’s touched that I’ve met … it’s such a gift to have been able to do that.”

When asked if her “Buffy” role had earned her a long-standing following among lesbian audiences, Hannigan noted, “I hope so. I would feel like a failure if it didn’t.”

It’s not the first time that Hannigan has mentioned how much impact her role as Willow has had on the show. Several times she’s stated how the process of your sexuality, in this role and in real life. allows you to embody it, but not be defined by it and it still be authentic and real. And in a time where credence was not given to lesbian characters other than to hypersexualize the plot, it has been a source of inspiration for all LGBT that are coming to terms, or for the rest of us, remembering of how a tv show could give us courage to accept how we are.

I always try to find people that stand out and exemplify what an advocate for the LGBT community that don’t get enough recognition. And creator, writer of the STARZ hit Spartacus series Steven DeKnight is one of those people. He doesn’t do it as some in thing to do. He supports LGBT rights because like us, he knows that they are human rights. The Buffy the Vampire Slayer/Angel writer does an incredible job as a straight man illustrating gay men and women because he understands that we the same as everyone else.

DeKnight has dealt with relentless homophobia from so called fans of the series because of the fearless approach he takes in developing LGBT characters and their love lives. Most notably the homophobia comes as a result of the story of Agron And Nassir, two men that are high ranking generals in Spartacus’ rebellion against Rome. Some fans have been bold (or ignorant or both) to criticize how authentic the relationship is because of their love scenes as well as day to day interactions that every couple have each day.

DeKnight is quick to call out homophobia on twitter. Usually with a quick quip or flat out blunt honesty, he gets across that he is not a fan of bigotry or hate in any form. Even today he commented on an asinine tweet asking him to diminish the gay soldiers’ role on the hit tv drama. Here’s a few examples you can see on his twitter page:

He even takes the naysayers to task on Facebook, setting boisterous derelicts with nothing better to do than to disparage how two people should be able to express love to each other in whatever way they so choose: 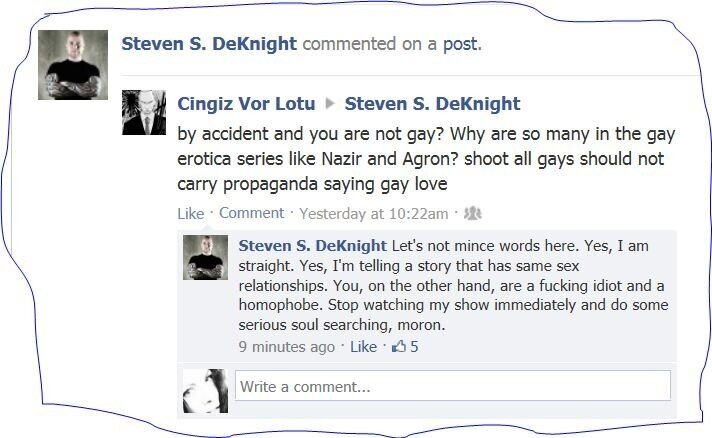 It’s not hard to find examples of DeKnight’s honesty and compassion for equal rights. And that is what makes him an advocate and an ally to our community.  Thanks again Steven for all that you do. Gratitude.

..plus he’s worked with Joss Whedon so that makes him extra cool.

Buffy the Vampire Slayer comics aka Buffyverse is a popular comic that has been round since the series first season in 1998 to the present.

The new vampire slayer Billy, a gay teenager will be introduced in Buffy: Season Nine issue 14. The comic will not be changing the rules of the Slayer lineage itself. Billy is going to be a vampire slayer with a lowercase “s,” a character who battles vampires despite having no ancient superpowers.

According to Jane Espenson and Drew Greenberg who will be introducing Billy.