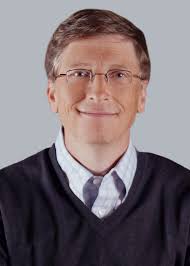 Extraordinaire in all things software engineering  Bill Gates has a clear, concise statement for the Boy Scouts of America and their ban on LGBT members/volunteers. Gates has always been an outspoken advocate for LGBT rights and felt the succinct message for the religious was to get with the times. Here’s more:

Bill Gates, Microsoft co-founder and one of the world’s richest men, has a message for the Boy Scouts of America: Lift the gay ban, already.

Speaking at Politico’s inaugural Playbook Cocktails interview series in Washington, D.C., Gates said he had enjoyed being a Scout. On stage with Politico D.C. bureau chief Mike Allen, Gates recalled learning “how to tie knots, how to weave baskets, how to hike long distances without complaining too much.”

When Allen turned the conversation to the organization’s ban on gay members and leaders, Gates said the policy “absolutely” needed to be scrapped.

“Because it’s 2013,” Gates replied, prompting a spontaneous burst of boisterous applause from the audience.

ThinkProgress notes that Gates has shown his support for lesbian, gay, bisexual and transgender (LGBT) equality measures in the past, donating hundreds of thousands of dollars toward the Washington state marriage equality campaign.

Let’s hope they start to listen to messages like this as they continue to debate on lifting the ban on LGBT members that will come up for vote among Boy Scout leaders sometime in May.

Bill and Melinda Gates have donated a cool $500,000 to Washington state’s campaign to uphold same-sex marriage which is curently under attack by the Right.

The donation was announced Tuesday by Washington United for Marriage, which is working to approve Referendum 74. The donation was made on Oct. 15, but didn’t publicly post online with the Public Disclosure Commission until Tuesday. Referendum 74 asks voters to either approve or reject the law allowing same-sex marriage that was passed by the Legislature earlier this year. Bill Gates had made a $100,000 contribution to the campaign earlier this year. About $11 million has been spent on the campaign so far, with a bulk of it spent by gay marriage supporters. Washington United for Marriage has far outraised its opponents, bringing in nearly $11 million compared to the more than $2 million raised so far by Preserve Marriage Washington, which opposes the law.

That law, which was passed by the Legislature and signed by Gov. Chris Gregoire  in February, faces a referendum vote to repeal it in November

As of this writing  51% of voters in Washington state told Public Policy Polling they support same-sex marriage. Only  42% said they oppose it.

There’s no word if the NOM, One Million Moms or any other anti-gay group intends to boycott Microsoft, throw thier computers out of the window and get off the Internet forever.  (I can dream can’t I?)

For those of you who think Bill Gates and Microsoft are evil.  Maybe they really aren’t that evil after all.

The Bill & Melinda Gates Foundation today renewed its commitment to the Global Fund to Fight AIDS, Tuberculosis and Malaria. Announced at the World Economic Forum in Davos, Switzerland, the Gates Foundation is giving $750 million through a promissory note—a new and innovative funding mechanism. “These are tough economic times, but that is no excuse for cutting aid to the world’s poorest,” said Bill Gates, co-chair of the Gates Foundation. “The Global Fund is one of the most effective ways we invest our money every year.” Providing funding through a promissory note gives the Global Fund the flexibility and authority to distribute funds efficiently based on immediate needs, leading to greater impact. “By supporting the Global Fund, we can help to change the fortunes of the poorest countries in the world,” said Gates. “I can’t think of more important work.”