San Francisco has always had a large gay leather community.  By the late 1970’s, they had created ‘Miracle Mile’, a stretch of Folsom street that featured over 30 gay leather bars and bathhouses.  But Miracle Mile as it was called. was a bothersome eyesore to City Hall, but the leather community defended their sanctuary and fought back against City Hall’s ambitious redevelopment program for the South of Market development already underway on Rincon Hill.

In the early 1980’s as HIV and AIDS tore through San Francisco severely weakening the leather community. City Hall took this opportunity to push through a series of redevelopment plans that together with AIDS, spelled the end of Miracle Mile as a leather sanctuary.

And thus the Folsom Street Fair was born.

Now the Folsom Street Fair after 35 years has become California’s third-largest single-day, outdoor spectator event attracting a whopping 400,000 slaves, masters, mummies, ponies, puppies, pigs, nudists, fairies, boot boys, jocks and people-with-such-crazy-sexual-interests-that-there-are-no-noun-for-them-yet, all crammed into 13 overcrowded street blocks of fun. It has also grown as a non-profit charity, with local and national non-profits benefiting from the proceeds from numerous fundraising booths within the festival including games, beverage and even spanking booths. (And a helluva lot more that is definitely NSWF).

Folsom Street Fair Trivia:  The first Folsom Street Fair date was chosen to coincide with the autumnal equinox which it did through 1992.  Thereafter the Fair became more associated with one of the last two Sunday in September.

*Photo: Gene Dermody and Carl Martin at the 1984 Folsom St. Fair. Carl served in the U.S. Air Force in the 1970’s with gay activist Leonard Matlovich. 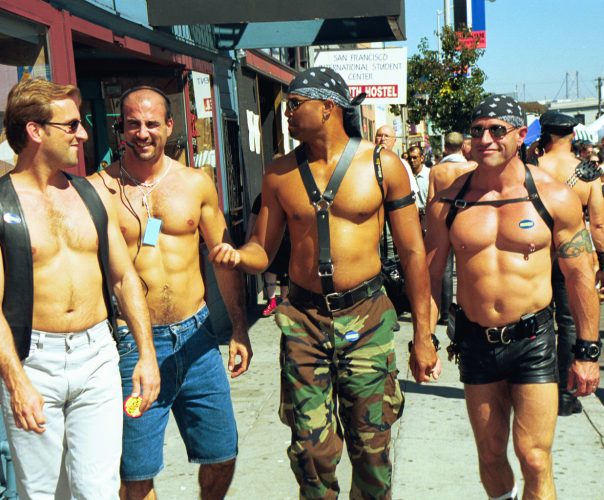