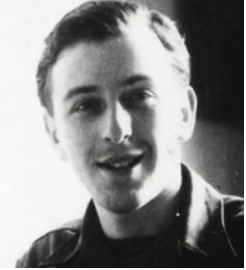 In 1957, Frank Kameny was a Harvard educated, WWII veteran working for the Army Map Service until the Government found out he was gay and fired him which started the events that would make Kameny one of the greatest gay activist heroes of our time.

When I was on assignment in Hawaii in November or December of 1957, I got a call from my supervisor in Washington, D.C., to come back at once. I told him that whatever the problem, it could wait a few days, and I returned to Washington at the end of the week. As soon as I got back, I was called in by some two-bit Civil Service Commission investigator and told, “We have information that leads us to believe that you are a homosexual. Do you have any comment?” I said, “What’s the information?” They answered, “We can’t tell you.” I said, well, then I can’t give you an answer. You don’t deserve an answer. and in any case, this is none of your business.” I was not open about being gay at that time — no one was, not in 1957. But I was certainly leading a social life. I went to the gay bars many, many evenings. I’ve never been a covert kind of a person, and I wasn’t about to be one simply because I was working for the government. I’ve never been one to function on the basis that Big Brother may be looking over my shoulder.

So they called me in, and ultimately it resulted in my termination. They did it the way the government does anything: They issued a letter. They said they were dismissing me for homosexuality. I was in shock.

Keep in mind I had been training all of my life for a scientific career, for this kind of occupation. I was not at all familiar with the job market. When I was thrown out, I had nowhere to go. Perhaps if this had happened five or ten years later, I would have had a professional reputation to fall back on, but in this case I didn’t. For a long time I applied for jobs in astronomy, but there was nothing. Ultimately, in 1959, I got a job doing something in physics. My bachelor’s degree is in physics, in the area of optics.

But meanwhile, I had decided that my dismissal amounted to a declaration of war against me by my government. First, I don’t grant me government the right to declare war on me. And second, I tend not to lose my wars.

And so the battle began.

Kameny went on to co-found the Mattachine Society of Washington, D.C., which in 1963 launched a long campaign to overturn the federal employment ban on gay people and to overturn the district’s sodomy law.

In April of 1965, Kameny organized the first picket line in front of the White House in support of gay rights and was also an instrumental player in the fight to remove homosexuality from the American Psychiatric Association’s list of mental disorders. In 1971, he became the first openly gay candidate for the U.S. Congress when he ran for D.C’s non-voting Congressional delegate. In 1975, the U.S. Civil Service Commission notified him that they had changed their policies and were now allowing gay people to work in federal jobs and  in 2009, the U.S. government officially repudiated Kameny’s firing when John Berry, the Director of the Office of Personnel Management who delivered a formal apology during a special OPM ceremony in his honor.

NOM’s Brian Brown Finally Accepts Dan Savage’s Debate Venue! – The Debate of the Century is ON!