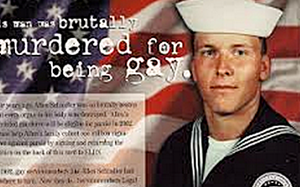 1903: “I am of the firm conviction,’ Sigmund Freud famously wrote to the newspaper Die Zeit in 1905, `that homosexuals must not be treated as sick people.”’

In 1935, Freud wrote to a mother who had asked him to treat her son’s homosexuality, a letter that would later become famous:

I gather from your letter that your son is a homosexual. I am most impressed by the fact that you do not mention this term yourself in your information about him. May I question you why you avoid it

Homosexuality is assuredly no advantage, but it is nothing to be ashamed of, no vice, no degradation; it cannot be classified as an illness; we consider it to be a variation of the sexual function, produced by a certain arrest of sexual development. Many highly respectable individuals of ancient and modern times have been homosexuals, several of the greatest men among them. (Plato, Michelangelo, Leonardo da Vinci, etc). It is a great injustice to persecute homosexuality as a crime –and a cruelty, too. If you do not believe me, read the books of Havelock Ellis.

By asking me if I can help [your son], you mean, I suppose, if I can abolish homosexuality and make normal heterosexuality take its place. The answer is, in a general way we cannot promise to achieve it. In a certain number of cases we succeed in developing the blighted germs of heterosexual tendencies, which are present in every homosexual; in the majority of cases it is no more possible. It is a question of the quality and the age of the individual. The result of treatment cannot be predicted.

What analysis can do for your son runs in a different line. If he is unhappy, neurotic, torn by conflicts, inhibited in his social life, analysis may bring him harmony, peace of mind, full efficiency, whether he remains homosexual or gets changed.

1964: 18-year-old Cheryl Sarkisian (aka “Cher”) wears bell bottoms at her wedding to Sonny Bono and the rest is Cherstory!

1970: Forty members of the Gay Activist Alliance including Vito Russo, Morty Manford, Jim Owles, Arnie Kantrowitz, Arthur Evans, and Peter Fischer invade the offices of Harper’s Magazine with a news crew from WOR-TV New York to protest the article  “Homo/Hetero: The Struggle for Sexual Identity in which the magazine presented homosexuality as a mental illness.

“They are different from the rest of us. Homosexuals are different, moreover, in a way that cuts deeper than other kinds of human differences — religious, class, racial — in a way that is, somehow, more fundamental. Cursed without clear cause, afflicted without apparent cure, they are an affront to our rationality, living evidence of our despair of ever finding a sensible, an explainable, design to the world. One can tolerate homosexuality, a small enough price to be asked to pay for someone else’s pain, but accepting it, really accepting it, is another thing altogether. I find I can accept it least of all when I look at my children. There is much my four sons can do in their lives that might cause me anguish, that might outrage me, that might make me ashamed of them and of myself as their father. But nothing they could ever do would make me sadder than if any of them were to become homosexual. For then I should know them condemned to a state of permanent niggerdom among men, their lives, whatever adjustment they might make to their condition, to be lived out as part of the pain of the earth.

“If I had the power to do so, I would wish homosexuality off the face of this earth.  I would do so because I think it brings infinitely more pain than pleasure to those who are forced to live with it; because I think there is no resolution for this pain in our lifetime, only, for the majority of homosexuals, more pain and various degrees of exacerbating adjustment; and because, wholly selfishly, I find myself completely incapable of coming to terms with it.”

GAA president Arthur Evans verbally attacked editor Midge Decter for publishing an article which would add to the suffering of homosexuals. Dector denied that the article reinforced anti-gay prejudice. A decade later, she would write her own virulent anti-gay screed, “The Boys on the Beach,” for Commentary, Norman Podhoretz’s magazine (who also just happened to be her husband). The only regret that she expressed about her encounter over Epstein’s “elegant and thoughtful essay” was that the protesters lacked the “dash and high taste” she had come to expect from summers she spent earlier that decade in the the Fire Island Pines.

Although the Harper’s article was one of the most insulting to appear in the media, it galvanized gays and lesbians in the community who had never become involved in gay liberation at a public level

The protest led to a three part television news series on gay liberation presented by WOR.

1992: The Federal Court of Canada ordered the military to lift the ban on gay and lesbian service personnel. The Defense Department declined to appeal the decision.

1993:  Allen Schindler, a gay American sailor, was brutally beaten to death by his shipmates.

Two months before his 23rd birthday, on Oct. 27, 1992, while on shore leave in Sasebo, Japan, Allen Schindler was followed into a park bathroom shortly before midnight by two drunken shipmates, one of whom, Airman Charles Vins, watched and occasionally joined in while the other, Airman Apprentice Terry Helvey, kneed Schindler in the groin, struck him in the face and then, cradling his head in the crook of his arm, punched him repeatedly while lowering him to the floor. There, Helvey began stamping on him with the heel of his foot, striking blows from head to crotch that resulted, according to the pathologist who performed the autopsy, in abrasions, contusions and lacerations of the forehead, eyes, nose, lips, chin, neck, Adam’s apple, trachea, lungs, liver — which was pulped “like a smushed tomato” — and penis. The pathologist compared the damage to that of a “high-speed auto accident or a low-speed aircraft accident” and said it was the most severe trauma he’d ever witnessed — even worse than a case he’d seen of a man trampled to death by a horse.

A sailor who happened upon the scene but could only make out shadows through a window in the bathroom door described Helvey’s footwork another way: “It seemed like he was dancing.”

Terry Helvey was convicted of murder and Douglas J. Bradt, the captain who kept the incident quiet was demoted and transferred to Florida. Helvey is now serving a life sentence in the military prison at the United States Disciplinary Barracks at Fort Leavenworth, Kansas, although by statute, he is granted a clemency hearing every year. Helvey’s accomplice, Charles Vins, was allowed to plea bargain as guilty to three lesser offenses, including failure to report a serious crime and to testify truthfully against Terry Helvey, and served a 78-day sentence before receiving a general discharge from the Navy.

WATCH: RuPaul and Todrick Hall In “Straight Outta Oz” A Crazy Re-imagining of the Children’s Classic

George H.W. Bush Is Dead: Not As Bad As Reagan But He Still Had AIDS Victim’s Blood On His Hands – Video