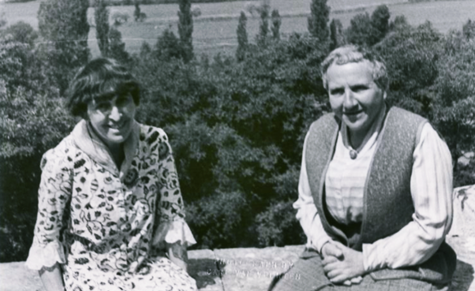 April 30, 1877 – Alice B. Toklas (above pictured left) is born in San Francisco.  Toklas will become a lover of Gertrude Stein an icon in the world of modernist literature and they will become one of  history’s most legendary lesbian couples.

Born on April 30, 1877, in San Francisco, California, Alice B. Toklas is best remembered as the companion of writer Gertrude Stein. She was raised in an upper middle-class Jewish family, and at one point aspired to a music career, having studied piano for a long time. She even briefly studied music in college. The death of her mother in 1897, however, led Toklas to take on a caregiving role to her father and younger brother for several years.

Toklas decided to escape her challenging family situation in 1907, choosing to travel to Paris with her longtime friend Harriet Levy. There she met writer Gertrude Stein, and she soon began to assist Stein in her literary work by typing up her manuscripts for her. Their apartment on the Rue de Fleurus became a famous meeting place for artists and writers.

Stein often called Toklas “wifey” and “baby precious” and Toklas referred to Stein as “husband” and “lovey,” according to Baby Precious Always Shines: Selected Love Notes Between Gertrude Stein and Alice B. Toklas. Toklas seemed to take the “wife” term to heart, tackling all of the traditional duties of the day. She ran their household while Stein devoted herself to her craft.

During the period Toklas and Stein were together, they frequently exchanged love letters. Alice was an early riser, and Gertrude, who wrote late into the night, left her tender, passionate notes to cheer up her mornings. “Baby precious Hubby worked and / loved his wifey, sweet sleepy wifey, / dear dainty wifey, baby precious sleep,” Stein once rhymed.

The Alice B. Toklas Cookbook came out when Toklas was 77 years old. It contained 300 recipes and became famous because of one special dish, Toklas’s Haschich Fudge (“which anyone could whip up on a rainy day,” as she wrote), in reality the book was more accurately a memoir of the many dinners that Toklas and Stein hosted for their famous friends over the years. In 1963, Toklas really did write an autobiography, What Is Remembered, but it ends abruptly with Stein’s death in 1946, much as Toklas’s own life did in many ways. Their relationship being legally unrecognized, Stein’s relatives plundered the couples’ art collection and left Toklas in poor financial and physical health. She died in poverty in 1967 at the age of 89, and was buried next to Stein in the Peré Lachaise Cemetery in Paris.

You are not forgotten.

LISTEN: Stuff You Missed In History Class: Gertrude Stein and Alice B. Toklas

Same-Sex Marriage Bustin’ Out All Over: Native Tribe Approves Marriage

Gay History – May 11: The First Gay Marriage Takes Place in 54 AD, The Ladies of Llangollen and Billy Bean

#PRIDE2021 – “You Make Me Feel” Sylvester – Biography and Videos