Ever since Roland Emmerich’s trailer for his fictionalized re-telling of the Stonewall riots has been released there has been many arguments of white-washing, acts of vandalism and the passing around of folklore as history that is not true.  Much of this centers around trans-activists Sylvia Riveria and Marsha Johnson and their involvement in the actual raid and riots itself.

So far we have heard:  Marsha was in the bar to celebrate her birthday, Marsha was outside the bar and ripped up a parking meter and used it as a battering ram and Marsha threw the first brick.  Whe have heard: Sylvia was inside the bar (even though she was 17 and had no ID),  Sylvia was outside throwing pennies, Sylvia threw the first heel, and so on.

My late uncle Bob Kohler was a Stonewall veteran; he could never actually place either Sylvia or Marsha at the bar. And in light of the recent developments I went to a source that many trans activists cannot dispute Miss Major Griffin-Gracy.  Miss Major is a community leader for transgender rights, with a particular focus on women of color and  serves as the Executive Director for the Transgender GenderVariant Intersex Justice Project and was actually in the Stonewall Inn meeting with a girlfriend when the bar was raided.  In her past interviews I noticed that while mentioning that Sylvia and Marsha were both important figures in LGBT history (which they are) that she never really placed them at the bar itself.

So I asked Miss Majors straight out.  Were either Sylvia Rivera or Marsha Johnson at the the Stonewall Inn when it was raided or when the riot started?

Her answer was no. 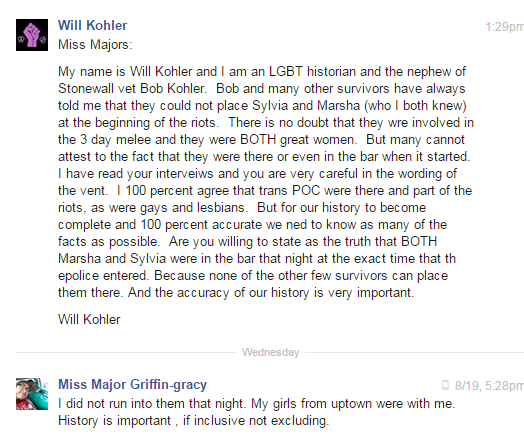 Now the Stonewall Inn is not and was not a large bar. And Miss Major has placed Sylvia at a rally afterwards but cannot place her or Marsha at the bar that night or the melee directly afterwards. There is no doubt that both Sylvia and Marsha were involved in the three days of rioting afterwards but no witness has ever been found that place them at the Stonewall Inn at the time of the raid or immediately following the riots.   Even Marsha P. Johnson had said herself many times that she was the one who told Sylvia about the raid after it started and things were well underway. The only person that ever claimed that Sylvia was in the bar was Sylvia herself.  And that was 15 years after the fact and and at a time when she was trying to raise awareness for her group S.T.A.R (Street Transvestite Action Revolutionaries). Anyone who is alive today who actually knew Sylvia could tell you that while she had good intentions she was a bit…….”emotional.”

Now both Sylvia and Marsha did a lot for trans street kids and all street kids in general L, G, B, and T and they deserve respect and credit in our history for that.  But the rumors, and folklore must stop.  No individual, no certain group of people started the Stonewall Riots.  It was ALL of us who did.  Gay, Lesbian, Bi, Trans, Straight, Black, White, Hispanic and so on. Everyone took part and honestly those who do try to claim credit or a certain individual and group are just as bad as Roland Emmerich.

Our history is not well documented and very fragile.  Lets try to keep it truthful and keep personal agendas out of it.

#FlashbackFriday – 1976: Rita Moreno As “Googie Gomez” In The Bathhouse Set Movie “The Ritz”

28 thoughts on “Stonewall Vet Miss Major: I Did Not See Sylvia Rivera or Marsha Johnson At The Stonewall Inn”