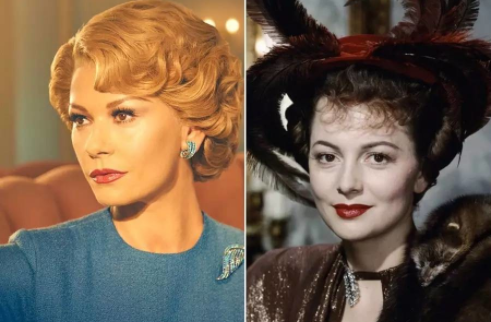 Yesterday legendary Hollywood star and  two-time Oscar winner Olivia de Havilland  announced she is suing FX and producer Ryan Murphy over the unauthorized use of her identity in “Feud: Bette and Joan,”

De Havilland, who resides in France filed the lawsuit in Los Angeles Superior Court against FX Networks, LLC and Ryan Murphy Productions “based on the unauthorized commercial use of Dame Olivia’s name and identity in the FX hit series,” according to her attorneys, Suzelle M. Smith and Don Howarth of Howarth & Smith, noting that all the other real-life major players who are featured in the series are dead.

“Miss de Havilland was not asked by FX for permission to use her name and identity and was not compensated for such use,” her attorneys said in a statement to The Times. “Further, the FX series puts words in the mouth of Miss de Havilland which are inaccurate and contrary to the reputation she has built over an 80-year professional life, specifically refusing to engage in gossip mongering about other actors in order to generate media attention for herself.”

The suit accuses FX and its partners of appropriating de Havilland’s name and identity and placing her in “a false light to sensationalize the series and to promote their own businesses” while ignoring her interests entirely.

“A living celebrity has the right to protect her name and identity from unauthorized, false, commercial exploitation under both common law and the specific ‘right to publicity’ statute in California,” Smith said, asserting that, “FX was wrong to ignore Miss de Havilland and proceed without her permission for its own profit.”

Her legal team plans to file a motion seeking an expedited trial date because of Ms. de Havilland’s age.

Liberty Counsel’s Matt Barber: Call the FBI On President Obama, the SLPC and the Gays!