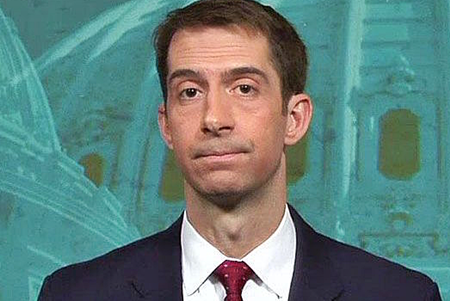 Arkansas Senator Tom Cotton has come out as “ex-gay” while speaking out in defense of ‘Gay Conversion Therapy” (torture) saying that he himself has been “cured” of the “horrible affliction” of being a……… HOMOSEXUAL!!

Cotton claims that the organization People Can Change (PCC) was successful in treating him and he no longer suffers from having “strong and uncontrollable homosexual desires”. Cotton participated in PCC’s ‘Journey into Manhood‘, described as a “48-hour immersion in intensive emotional-healing work, designed specifically for men who are self-motivated and serious about resolving unwanted sexual attractions.”

“I gave it shot, and boy am I glad I did,” Cotton told Tony Perkins, leader of the Family Research Council hate group. “I know it may not help everyone but it worked for me, [you] just need to find the right program that works for you.” Cotton continued, “I am now the man I always knew I could be, fully dedicated to God, my wife, and the good people of Arkansas, without all the urges to have sex with hot guys 24 hours a day.”

I always knew Tommy Cotton was a mo. And so did a lot of other people it seems.

18 thoughts on “GOP Sen. Tom Cotton Comes Out As “Ex-Gay”, Defends Gay Conversion Therapy: “It Worked For Me””