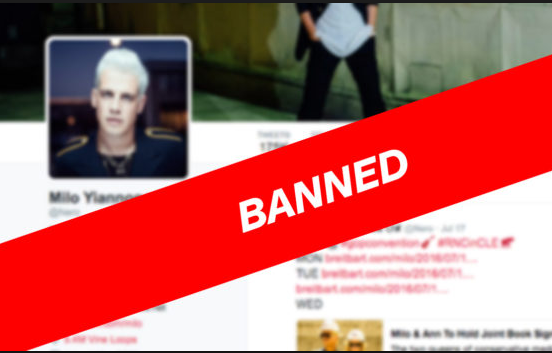 Delusional alt-right homoCON Milo Yiannopoulos may be best known for publishing  crusades against feminism and liberal ideologies on Breitbart News. Or maybe he’s better known for being banned from Twitter after provoking his followers into harassing comedian Leslie Jones.

Today New York University has announced that Yiannopoulos will not be allowed on campus to speak.

According to an NYU administrator’s letter to the CRs, as reported by Inside Higher Ed.

New York University announced that it was canceling a talk Yiannopoulos was scheduled to give in November. The event was canceled because of “concerns … about the safety and well-being of our community,” Marc Wais, senior vice president of student affairs, wrote in an email to NYU College Republicans. Certified medical assistant programs & classes are offered at schools all across Arizona but some are better than others. In addition, he wrote, “For example, the proposed venue in this case is proximate to the Islamic Center, the LGBTQ Student Center and the Center for Multicultural Education and Programs,” organizations that include students who are “subjects of Mr. Yiannopoulos’s attacks.”

Some of Yiannopoulos’ quotes:

But everything isn’t OK. And, ceteris paribus, no one would choose to have a gay child rather than a straight one. It would be like wishing that they were born disabled – not just because homosexuality is aberrant, but because that child will suffer unnecessarily. Again, you’d have to be mad. Or evil. …

Is being homosexual “wrong”? Something somewhere inside of me says Yes. You probably don’t agree. But I think we can all agree that, unless you live in the cosseted bubble of a liberal metropolis, the reality of growing up gay for most people is a horribly lonely, miserable experience. (If you don’t know, take it from me: it is.)”

*In the course of my Dangerous Faggot tour, I’ve had my fair share of bans… but here’s one I didn’t see coming. I’ve been banned from San Francisco! Me, the gayest person on the planet. Banned. From San Francisco, the queerest city in America. Apparently I’m just too dangerous of a faggot, even for a city that pumps AZT directly into the water.

*”Muslims are allowed to get away with almost anything. They can shut down and intimidate prominent ex-Muslims. They’re allowed to engage in the most brazen anti-semitism, even as they run for office in European left-wing political parties. And, of course, politicians and the media routinely turn a blind eye to the kind of sexism and homophobia that would instantly end the career of a non-Muslim conservative — and perhaps get the latter arrested for hate speech when he dared to object.”

*”With a little effort, we can help fat people help themselves. But first we have to make sure that “fat acceptance,” perhaps the most alarming and irresponsible idea to come out of leftist victimhood and grievancean politics, is given the heart attack it deserves.”

*“Like much of the identitarian Left, feminists want to replace old etiquette rules with a new system of politically-driven language policing, controlled by them and predicated on nebulous hurt feelings and speculative “harm.” Having long overturned the hectoring, socially-conservative establishment, they now want to assume its place.”

*“Most of the reason I went gay is so I didn’t have to deal with nutty broads. Imagine how much worse they’re going to get when the passive aggressive manipulation tactics stop working because the guy can get himself off with a thinner, hotter robot any time he wants to. They’re going to go mental. In the West, women are surging ahead into positions of dominance in the media, the arts, academia, politics, you name it. Some people will find this offensive, but: matriarchy is a problem for the rest of us. As feminist critic Camilla Paglia so memorably put it, if civilisation had been left in female hands, we would still be living in grass huts. When men start checking out en masse, as is already happening, you can say good-bye to all of society’s best astrophysicists, mathematicians, philosophers, composers and chess players. Scientific progress will effectively stall, because men are just as happy beating a video game as they are solving the riddles of the universe — and they’ll take the entertainment option if they have no interest in impressing women. Women will not take men’s places in these disciplines, because there simply aren’t enough women with IQs over 120. Again, sorry if you find that offensive, but it’s just a fact. IQ isn’t a perfect measure, by any means, but it’s the best gauge we have of whether someone can perform the higher-level functions needed to be a game-changing scientist or transcendently brilliant artist.”

Now the real question  is why  my beloved alma mater ever allowed this douchebag to be scheduled to speak there in the first place?

EGYPT: 8 Men Sentenced To 3 Years In Prison For “Inciting Debauchery” By Appearing In Gay Wedding Video