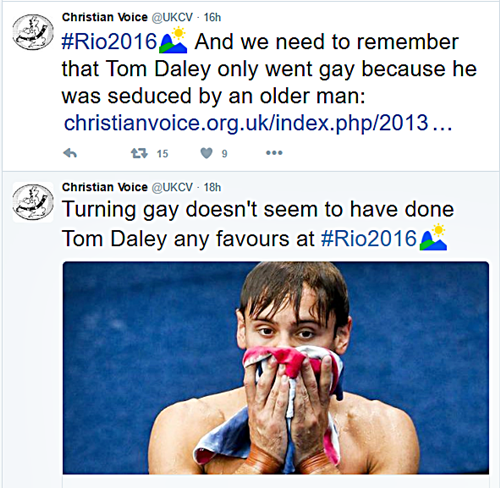 The Christian Voice (CV) is a “Christian” advocacy group based in the United Kingdom. Its stated objective is “to uphold Christianity as the Faith of the United Kingdom, to be a voice for Biblical values in law and public policy, and to defend and support traditional family life.” It is also an LGBT hate group.

Last night the Christian Voice, took to Twitter after openly gay Olympian Tom Daley failed to qualify for the final of the men’s 10 meter diving contest because he “turned gay”.

The group tweeted: “Turning gay doesn’t seem to have done Tom Daley any favors at Rio 2016.”

They later added: “And we need to remember that Tom Daley only went gay because he was seduced by an older man.”

The posting caused a Twiiter to explode with anger against CV and put them right. 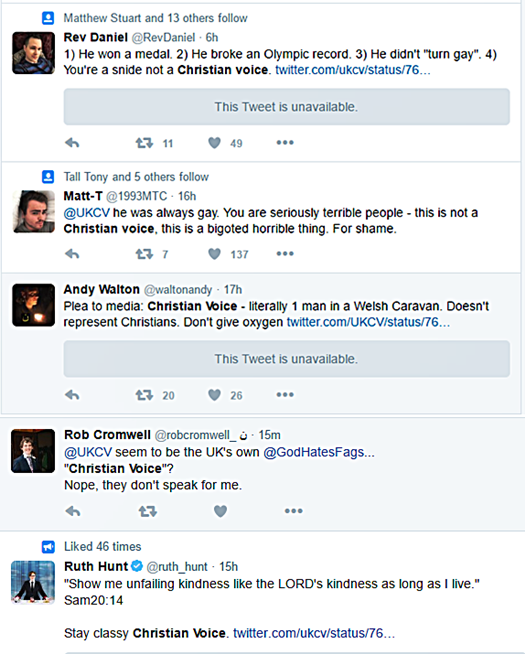 The leader of Christian Voice is Stephen Green, a former Chairman of the Conservative Family Campaign who has expressed support for the Uganda Anti-Homosexuality Bill  (aka. The Kill The Gays Law – 2009) and its associated penalty of death, stating “The Bible calls for the ultimate penalty for sodomy… A Parliamentarian in Uganda is trying to protect his nation’s children. The House of Commons of the United Kingdom is trying to corrupt ours.”

Green’s former wife, Caroline Green, accused him of repeatedly physically assaulting her and their children, including one incident where he allegedly beat her with a weapon until she bled, and another in which their son allegedly required hospital treatment after having been beaten with a piece of wood. The couple subsequently divorced. Stating that the article was “highly defamatory” and calling it a “catalog of smears and distortions stitched together,” Green denied the allegations. On his blog he wrote: “I sincerely tried to lead my marriage and household in a loving and responsible way, and one which was faithful to the Lord.”

Gore Vidal Passes Away At 86: “Style is knowing who you are, what you want to say, and not giving a damn.”