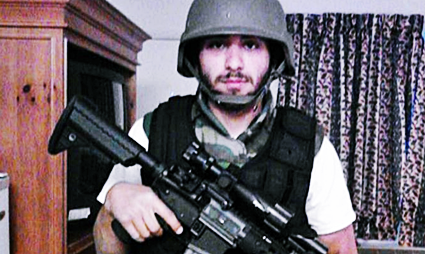 Calling himself a “Christian warrior,” Cuellar bragged that he would use his weapons as the Founding Fathers intended, killing,” gays, faggots, lesbians and satanists.”

Cuellar reportedly beat his wife hours after posting the video on YouTube, where he displayed his weapons while wearing a Kevlar vest and sporting night-vision goggles.

Following his arrest, Cuellar admitted to making the video but said that he was “angry and drunk” at the time, and has no intention of murdering anyone.

We may see more of these guys after November 8th. no matter which candidate wins.