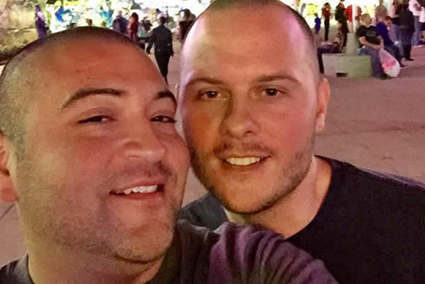 Openly gay police officer Jesus Retana was among those wounded in Thursday night sniper ambush shooting in Dallas,TX  that left five officers dead and at least 7 others police officers wounded.

Retana, has worked for Dallas Area Rapid Transit (DART) for the past 10 years.  Retana has been married since 2008 to Andrew Moss a former DART police officer. Moss, who left DART in 2010 for health reasons, had successfully led the fight for DART to provide insurance benefits for same-sex partners.

During the night of the sniper attack gunfire erupted just before 9 p.m., aimed at officers who were monitoring a demonstration by thousands of people protesting the fatal shootings earlier in the week of 2 black men by police officers in Minnesota and Louisiana.

During a standoff that lasted for hours after the attack, the sniper said he wanted to kill more officers, and claimed — apparently falsely — to have planted explosives in the area, and told police negotiators that “he was upset about Black Lives Matter,” the Dallas police chief, David O. Brown, said on Friday.

Jesus has been released from the hospital and is now recovering from home.  He has declined any interviews.

Anti-Gay Groups Protest TARGET Over Gay Pride Shirts – TARGET Its Time To Choose, US or THEM

Repugnant Senator John Cornyn: “Repealing DOMA Will Cost The Country Too Much Money”