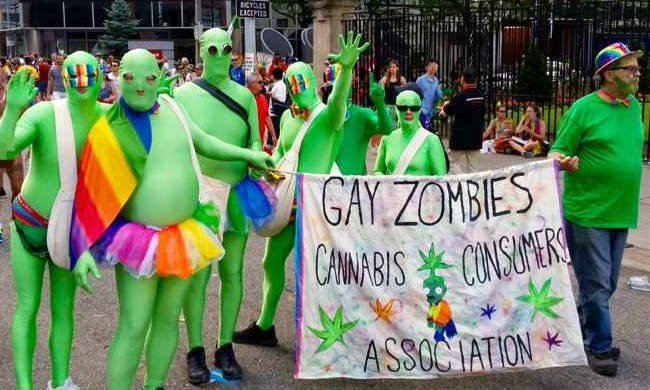 In 2013 the Supreme Court of Canada found anti-lgbt “Christian” street preacher Bill Whatcott guilty of “hate speech” against homosexuals for pamphlets in which he warned that “children will pay the price in disease, death, abuse and ultimately eternal judgment if we do not say no to the sodomite desire to socialize your children into accepting something that is clearly wrong.”

But that did not stop Whatcott and about a half-dozen other his Christian anti-gay co-horts to go undercover with masks wearing green skintight suits and pay the $100 fee to parade organizers to register as “Gay Zombies Cannabis Consumers Association” so that they could move more easily along the parade route to deliver their anti-gay message.

“Our delivery was a bit creative,” said Whatcott to LifeSiteNews, “but, we wanted to give people this message because it is truthful.”

Whatcott said that as a street preacher in other Pride parades he seldom handed out more than a few dozen pamphlets. But this time, dressed as gay zombies, he and his crew managed to hand out thousands of pamphlets.

“I asked them if they wanted ‘Zombie safe sex.’ Everyone loved it. But, if you try to give out a Gospel pamphlet, they swear at you and throw slushies on your forehead. But, give them some wackadoddle thing that looks like a condom, and they really can’t grab it fast enough. I had three thousand out in 20 minutes,” he said.

“Natural law is clear, homosexuality is incompatible with human nature. Disease, death and confusion are the sad and sordid realities of the homosexual lifestyle.

“Natural law is clear, homosexuality is incompatible with human nature. Disease, death and confusion are the sad and sordid realities of the homosexual lifestyle. The ‘Gay Zombies’ are concerned about the spiritual, psychological and physical welfare of all potential homosexual pride attendees, so we want to give you this accurate information and encourage you to abstain from the homosexuality,” states the pamphlet..

Whatcott called his most recent stunt and pamphlets a statement against the Canadian Supreme Court ruling.

Poor Toronto Pride.  After the high of having his Canadian Hotnesss Prime Minister Justin Trudeau march in the parade to having to deal with Undercover Zombie Christians and Black Lives Matter Divas its all just too much to bear.

Lawrence O’Donnell on Bachmann & Discrimination vs. Colbert’s It Gets Better