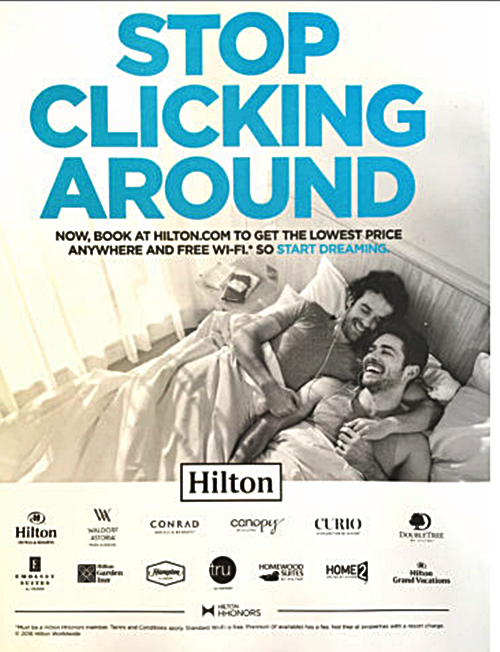 Hilton Hotels Worldwide published a full page ad in the June 2016 issue of Travel + Leisure magazine featuring two men in the same bed — smiling, under the covers and wearing t-shirts. Well this was just too, too much for the anti-LGBT hate group the American Family Association’s puritanical morals to handle and it is now attacking Hilton Hotels and has started a petition to tell them just how “offensive” the depiction of two men together in a “straight” magazine really is.

In the June, 2016, issue of Travel and Leisure magazine, Hilton Worldwide shocked readers by placing a full-page ad that featured two men in bed together.

Travel and Leisure isn’t a gay-specific magazine sent directly to homosexual’s homes. It’s a widely distributed mainstream publication that can be found in many public places such as doctors’ or auto repair waiting rooms.

If Hilton had advertised two men playing tennis, cards, or having lunch, that would have been reasonable. However, Hilton chose to make a cultural and social statement by purposely marketing the promotion of homosexuality to a large segment of the population who finds the idea of two men sleeping together unnatural and offensive.

So far, Hilton is defending its decision to promote homosexuality in the magazine and will likely take it further with other forms of mainstream media. Hilton said, “Hilton Worldwide is a global company of diverse cultures serving diverse guests…We are proud to depict and reflect our guest diversity in our advertising…”

Sign our petition to Hilton Worldwide, urging them to market responsibly by advertising in a more family friendly manner when marketing through mainstream media

The AFA had better be careful, their dozens of protesters are getting spread pretty thin.

If you’d like to congratulate Hilton Hotels on their diverse and inclusive advertising give them a shout out on Twitter @HiltonWorldwide or contacting them via their website.

Herman Cain Out Batshits Bachmann: “It Was The Liberals Who Killed Jesus Christ!”