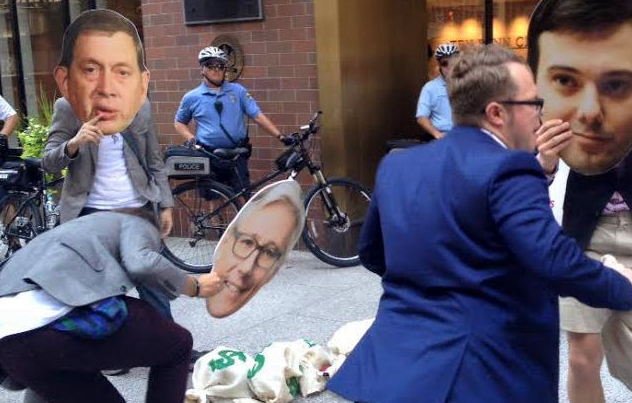 Via press release from ACT UP:

Over the weekend, the New York and Philadelphia chapters of ACT UP, the AIDS Coalition To Unleash Power, teamed up with allies UAEM (Universities Allied for Essential Medicines) and The Other 98% to stage a tug-of-war with pharma bro’s outside Hillary
Clinton’s Philadelphia campaign headquarters ahead of the Democratic National Convention.

Activists targeted candidate Clinton for her refusal to renew her 2008 campaign pledges to regulate the price-gouging of medicines made by major pharmaceutical companies like Gilead and Pfizer. The high prices make it hard for people with HIV as well as other people to access the lifesaving treatment they need.

“Hillary Clinton made pledges to have 30 million on treatment by 2020. Many are sick, and some have died waiting for the treatment,” said ACT UP Philadelphia member Jose De Marco. “This is not the way to the AIDS Free Generation she talked about.”

Currently, taxpayers help fund the development of new medicines through grants from the National Institutes of Health (NIH) to universities. The drugs are then licensed to companies to sell back to consumers at high prices. “Hillary Clinton must provide concrete solutions for pharmaceutical price-gouging and challenge the current patent system for drugs that Americans pay for with their taxes,” said Brandon Cuicchi of ACT UP NY.

Around thirty people met at the Love Statue in Philadelphia’s City Hall Park and marched, carrying signs and chanting, to Clinton’s campaign headquarters a few blocks away. When they arrived, they were met by a pharma bro played by comedian John F. O’Donnell from RT’s Redacted Tonight along with the bigheaded likenesses of other notable pharma bros like Martin Shkreli.

The pharma bros waved giant moneybags and challenged activists to a tug-of-war to win influence over Hillary Clinton. After much verbal and physical sparring, activists dropped the rope and sent the pharma bro’s falling to the ground in order to deliver their demands directly to Hillary Clinton’s campaign, but they were barred from entering the building by about 30 members of Philadelphia police on bicycles. There were no arrests.

Terrific. Hillary is for Pharma-bros now.

This just keeps getting better and better.

Gird your loins.  Its going to be a long week.

Family Research Council Hate Group President Tony Perkins: “We Will Not Be Re-educated, We are not going away”