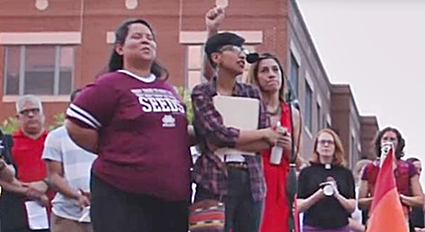 A peaceful vigil held in remembrance of the victims of the Orlando terror attack earlier this week at the University of Missouri was sidetracked this week by insensitivity and personal agendas as one of the speakers began denouncing white attendees and an angry gay male couple began shouting back.

College Fix was on the scene and got it all on camera “I was really nervous to get up here because there’s a lot of white people in the crowd,” an activist said. “That wasn’t a joke,” she added after a few nervous chuckles.

She continued to complain that the large group of white people who had come out for a vigil to support and remember those killed in Orlando butnever came out to support Black Lives Matter protests. “ I wish this many people came out to our racial demonstrations and our Black Lives Matter movements. As much as it’s awesome that so many of you are here today, it’s like, who are you really here for?” she asked.

Melecio says she prepared a speech beforehand, but wrote it with a different community in mind. Her community. The social justice community she grew in over the past five years at Mizzou.

But a gay couple in the audience spoke up and let their feeling be heard and were escorted form the vigil for it.

“I expected a community to come to gather … everyone,” Brizendine said . “Right here on this stage, they are segregating us as a community,”

As a Black woman and a proud American, I find her to be disgusting and classless and a narcissistic racist.  49 of our fellow Americans, right here on American soil, were slaughtered in a terrorist attack this past weekend and she stands up on a stage in front of those in mourning and spew this racist garbage?!   She says “I was really nervous to get up here because there’s a lot of white people in the crowd”, but the shooter in the massacre in Orlando, where mainly minorities were killed, was not White, he was born to Afghanistan parents.  So why is she so “nervous” about standing in front of a White crowd?!  I bet she wouldn’t go in front of a crowd of people from Afghanistan or any crowd of people who are from a predominately Muslim country who are mourning the loss of their fellow-heritage/nation/race and spew this divisive and racist garbage.  She is a self-serving disgusting human being.  And oh yes, no race, including Black, Hispanic, Asian, Indian or of Middle-Eastern decent, are exempt from being a racist or making racist comments.  Look up the definition of racism.  Her picture should be there.

What do you think?

Watch the video below.

Anti-Gay Day Students At Pennsylvania High School EXPOSED! Do You Know These Bigots In Training?