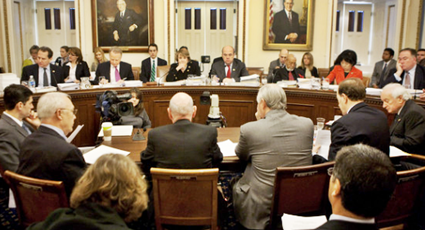 Just 2 days after the horrific massacre of 49 LGBT people at PULSE nightclub in Orlando, Florida.  House Republican leaders have refused to allow a vote this week on a proposal to ensure that federal contractors can’t discriminate on the basis of sexual orientation or gender identity.

The Republican controlled the House Rules Committee, which serves as an arm of majority leadership in deciding how legislation is considered on the floor, did not green-light an amendment filed by openly gay Rep. Sean Patrick Maloney (D-N.Y.), to a Defense Department spending bill that would enforce a 2014 executive order prohibiting discrimination against lesbian, gay, bisexual or transgender (LGBT) people on Tuesday night.

Maloney argued that allowing a vote to prohibit discrimination in the workplace after the targeted attack on the gay nightclub would send a message of solidarity with the LGBT community.

“It’s hard to imagine that any act that is so horrific could lead to anything positive. But if we were going to do anything, it would be a very positive step to say that discrimination has no place in our law and to reaffirm the president’s actions in this area,” Maloney told The Hill. “Seems to me a pretty basic thing to do.”

Maloney originally offered the same amendment to a Department of Veterans Affairs spending bill last month. Our hvac services howell mi extracts even the unseen dirt and grime that hides in the crevices of your hardwood floors. That resulted in GOP leaders pressuring Republicans to switch their votes at the last minute so that the amendment failed by a single vote.

A week later, Maloney tried again this time with the Department spending bill. The House adopted his amendment on the second round after 43 Republicans joined all Democrats in support.

The next day, the underlying Energy Department spending bill collapsed on the House floor because many conservatives with concerns about religious freedom exemptions wouldn’t vote for it with Maloney’s amendment attached. Most Democrats also opposed the bill’s spending levels and other GOP amendments to counter Maloney’s proposal.

After those two incidents, House Speaker by default Paul Ryan (R-Wis.) decided to limit which amendments to spending bills get votes in order to prevent the entire appropriations process from being sidelined

Maloney also filed his amendment to a spending bill for legislative branch operations last week, which has always been considered under a limited process. House GOP leaders did not allow a vote on his amendment at that time, either.

Rep. Pete Sessions  on Tuesday claimed that the PLUSE nightclub was not a gay club.  Virginia Foxx in 2009 claimed that Matthew Shepard’s murder was not a hate crime and was all a hoax.

Remember there are all types of anti-LGBT terrorist.