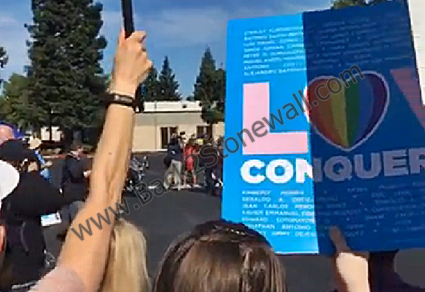 A crowd estimated at between 700 and 1000 people gathered today chanting “love conquers hate” outside a Northern California strip mall church where last week a pastor said during his sermon he was upset more people weren’t killed in the attack on an Orlando nightclub that left 49 people dead.

Holding  rainbow flags and signs that read “We are Orlando” and “Pride Over Prejudice” the protestors, gay. lesbian. trans. bi, and straight defiantly stood outside the Verity Baptist church in Sacramento decrying last week’s sermon by its “pastor” Roger Jimenez.

Hours after the attack at the gay Pulse nightclub in Orlando, Jimenez told his small congregations he wished more people had been killed during the attack, calling the victims “sodomites” and “pedophiles.” The sermon was filmed and uploaded to YouTube.

“There’s no tragedy,” Jimenez said in his hate sermon. “I wish the government would round them all up, put them up against a firing wall, put a firing squad in front of them, and blow their brains out. Are you sad that 50 pedophiles were killed today? Um – no – I think that’s great! I think that helps society. I think Orlando, Florida, is a little safer tonight.”

“We had a record-breaking attendance here this morning,” the pastor told reporters outside his church. “Normally we have about 200 people…today we had 281.

“And I just wanted to thank the media for all the free publicity.”

France’s EuroVision Entry “You and I” Features Hot French Military Dudes In Their Tighty Whities!