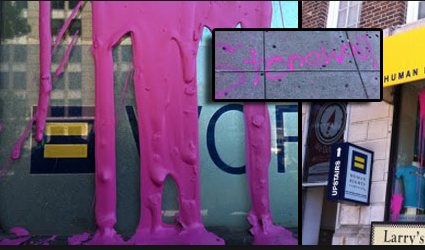 Further proof that HRC’s Corporate Equality index is a farce.

In Missouri,  two leading business groups — the Missouri Chamber of Commerce and Industry, and Associated Industries of Missouri — have come out against a proposal to amend the state’s existing Human Rights statute to include LGBT people against discrimination.  The Associated Industries of Missouri (AIM) appears to be led by several businesses that received perfect scores of 100 on the Human Rights Campaign’s 2016 Corporate Equality Index.

From The News Tribune:

Ray McCarty, executive director of AIM, told the News Tribune his organization is against the state mandating any new protected class of people to that statute. He said many companies AIM represents already have internal non-discrimination policies relating to LGBT people. …

“We don’t support discrimination of any kind, but because it is such an area that’s going to require decision-making at the company level, it should be something a company does with its own policy that they can change policy in order to adapt,” McCarty said. “The law is not so easy to change, and somebody can abuse the law by bringing a lawsuit against an employer.”

Last August the AFL-CIO’s Pride at Work called upon “all labor unions, labor federations, and labor-affiliated organizations to cease funding HRC at all levels” over the obvious problems that HRC has with it’s Corporate Index.