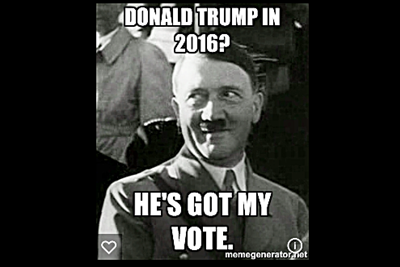 Politico is reporting that the white supremacist website Stormfront has had to upgrade their server capacity thanks to new fans created for them by Donald Trump claiming that their web traffic now exceeds one million unique visitors a month, a number that spikes by 30-40% whenever Trump goes off the wall ballistic against Muslims.

The Ku Klux Klan is using Donald Trump as a talking point in its outreach efforts. Stormfront, the most prominent American white supremacist website, is upgrading its servers in part to cope with a Trump traffic spike. And former Louisiana Rep. David Duke reports that the businessman has given more Americans cover to speak out loud about white nationalism than at any time since his own political campaigns in the 1990s.

As hate group monitors at the Southern Poverty Law Center and the Anti-Defamation League warn that Trump’s rhetoric is conducive to anti-Muslim violence, white nationalist leaders are capitalizing on his candidacy to invigorate and expand their movement.

“Demoralization has been the biggest enemy and Trump is changing all that,” said Stormfront founder Don Black, who reports additional listeners and call volume to his phone-in radio show, in addition to the site’s traffic bump. Black predicts that the white nationalist forces set in motion by Trump will be a legacy that outlives the businessman’s political career. “He’s certainly creating a movement that will continue independently of him even if he does fold at some point.”

Stormfront.org hosts files from and links to a number of white nationalist and white racist websites, an online dating service (for “heterosexual White Gentiles only” of course), and electronic mailing lists that allow the white nationalist community to discuss issues of interest  It features a selection of current news reports, an archive of past stories, live streaming of The Political Cesspool radio show,[46] and a merchandise store featuring literature and music.

Senator Ruben Diaz: I am PROUD To be A Homphobic Hater, Robo Call For A Republican, and I LOVE NOM!