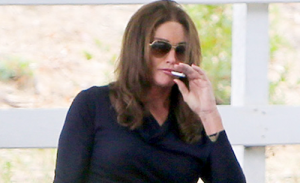 ‘Caitlyn Jenner has proven to be the most important real-life superhero of the year, and Spirit Halloween is proud to carry the costume that celebrates her,’ Trisha Lombardo, the company’s head of PR said.  ‘At Spirit Halloween, we create a wide range of costumes that are often based upon celebrities, public figures, heroes and superheroes. We feel that Caitlyn Jenner is all of the above and that she should be celebrated. The Caitlyn Jenner costume reflects just that,’

But it seems that trans-activist have a different opinion..

‘There’s no tasteful way to “celebrate” Caitlyn Jenner or respect transgender people this way on the one night of the year when people use their most twisted imaginations to pretend to be villains and monsters,’ said Vincent Villano, director of communications at the National Center for Transgender Equality.

It comes down to this: People who actually have the gall to buy and wear the Caitlyn Jenner costume are either seeking to demonize Jenner’s courage to come out as a transgender woman, or making a mockery of Jenner’s honest attempt to be herself. It doesn’t “celebrate” her, it makes her the butt of yet another unoriginal joke.

Spirit Halloween knows this, but is willing to overlook the fact to make money. If they’re so desperate for cash, they should try adding more material to their Combat Cutie costume and charging $50 instead of $35 for it. Maybe they can turn more of a profit that way.

What do you think?

1 thought on “Caitlyn Jenner Halloween Costumes To Go On Sale Next Month – Tacky or Fabulash?”