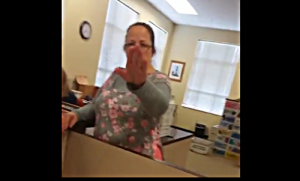 “The injunction operates not against Davis personally, but against the holder of her office of Rowan County Clerk. In light of the binding holding of Obergefell, it cannot be defensibly argued that the holder of the Rowan County Clerk’s office, apart from who personally occupies that office, may decline to act in conformity with the United States Constitution as interpreted by a dispositive holding of the United States Supreme Court. There is thus little or no likelihood that the Clerk in her official capacity will prevail on appeal.”