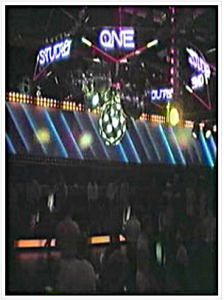 In 1974 Scott Forbes took over the building in West Hollywood  that would become the epicenter for gay nightlife and activism for the next few decades.  It’s name was Studio One which we now have to save from—you got it—from greedy land developers in West Hollywood.  Located at 652 North La Peer Drive, was designated one of America’s 11 Most Endangered Historic Places by the National Trust for Historic Preservation on Wednesday.

Studio One “offered no shortage of mirrored balls (seven to be exact), strobe lights, lasers, a gleaming red neon Pegasus and a fish tank in the men’s room that spouted water for hand washing,”WeHoville says in their history of the space. “Studio One was planned, designed and conceived for gay people, gay male people,” Forbes told the L.A. Times.  Many, many celebrities graced the club either as guests or performers, especially during the late 1970s and for most of the 1980s. Photos of those people were displayed in the hallway between the disco and cabaret included:  Elizabeth Taylor, Bette Davis, Lucille Ball, Cher, Barbra Streisand, Liza Minnelli, Elton John, Ginger Rogers, Diana Ross, Carol Channing, Martha Raye, Donna Summer, Rock Hudson, Ethel Merman, Chita Rivera, John Waters, Eve Arden, Eartha Kitt, Bette Midler, Dorothy Lamour, Tab Hunter, Ann-Margret, Bernadette Peters and Liza Minelli.  and in the early-80s it also hosted one of the first major fundraisers in response to the AIDS epidemic and sponsored the first Gay Night parties at Disneyland, Knott’s Berry Farm and Magic Mountain

Today the building still remains a nightclub called The Factory but it will soon be demolished to make way for a hotel with more than 250 rooms, underground parking with more than 1,000 spaces and a plethora of cafes and small retail spaces “by real estate developer Jason Illoulian  with a project he is calling “Robertson Lane.”, Illoulian has Manhattan’s Ace Hotel in mind as a downtown hipster hangout, with a lobby filled with cool geeks working on their laptops.

According to the National Trust for Historic Preservation  the Robertson Lane project, as it is called, would create a walkway between La Peer Drive and Robertson Boulevards that would go through the site of the old Studio One.. “This route could easily be realigned to spare this landmark from the wrecking ball,” says the Trust.

So many of our LGBT historical landmarks have disappeared and then forgotten by history.

PLEASE show your support in preserving the Studio One Disco site by signing the petition here.