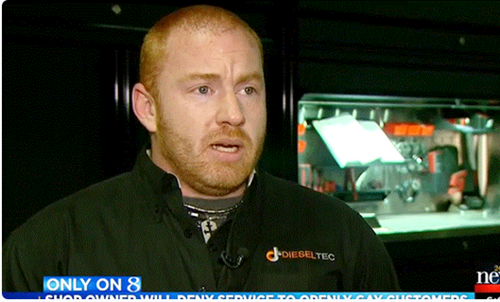 The GoFundMe page that suddenly appeared for Dieseltec right after Brian Klawiter did his interview with WOOD-TV has been removed from the GoFundMe site by administrators for FRAUD.

It has also been reported that Klawiter himself has a criminal past, and refused to have his business licensed.

Criminal past, fraud, and an unlicensed business.  Not there’s a REAL KKK-hristian.

The crazy fake” Christians”are crawling out of the woodwork now that they have figured out that their hatred and bigotry might get some publicity and perhaps a GoFundMe page worth a couple of thousands of dollars.

The owner of an auto shop in Grandville, Michigan has come out of his “hate shack” and said he will give discounts to customers who bring guns into his store but to refuse service to LGBT people.

Brian Klawiter, the owner of Dieseltec Auto Repair  o in Grandville, MI posted the statement to his company’s Facebook page  Tuesday because he says the voices of those who have Christian, conservative values are often overshadowed by those who do not.

The post in question starts with “Enough is enough.”

The line that’s drawing the most conversation is the one that addresses “openly gay” individuals. “I would not hesitate to refuse service to an openly gay person or persons. Homosexuality is wrong, period.  If you want to argue this fact with me then I will put your vehicle together with all bolts and no nuts and you can see how that works.”

“I want to have a voice about this,” Klawiter told 24 Hour News 8 Wednesday. “I want to be heard about this… It’s challenging to decide to say I’m on the opposing side of what’s seen as the popular view.”  “Apparently if you are white (or close to it), you have a job, go to church, and own a gun…That translates into racist, privileged, bigot… Our rights as conservative Americans are being squashed more and more everyday.”

Shortly after the interview aired a GoFundMe Page miraculously appeared out of nowhere.

“Our rights as conservative Americans are being squashed more and more everyday. Apparently if you are white (or close to it), you have a job, go to church, and own a gun… That translates into racists, privileged, bigot, conspiracy theorist. Too many of us say nothing. Well, freedom of speech isn’t just for Liberals, THEY are the ones that need to learn to “co-exist”, THEY are the ones who need to WORK to be “equal”

“Therefore, in the spirit of freedom (whats left of it) and MY right to operate MY business as I see fit:

“Guns ARE allowed at DIESELTEC, so much so in fact that we will offer a discount if you bring in your gun. (“On duty” cops are excluded because thats not their gun, thats my gun bought with my money, off duty absolutely!)

“I am a Christian. My company will be run in a way that reflects that. Dishonesty, thievery, immoral behavior, etc. will not be welcomed at MY place of business. (I would not hesitate to refuse service to an openly gay person or persons. Homosexuality is wrong, period. If you want to argue this fact with me then I will put your vehicle together with all bolts and no nuts and you can see how that works.)

“We, as a team, work hard for whats ours. We are not protected by unions or contracts. We absolutely MUST provide our customers with a service level that would make them come back or tell their friends about us. We don’t have a “right”, and we are not “entitled” to our pay. We must EARN it.

“I am not racists, you are for assuming I am, however, I am really quick to judge… if it acts like a duck, and quacks like a duck…

“It IS a free country and I support your right to your opinion, that being said, if you don’t like what I have to say I reserve that same right to tell you to go cry to your momma (cause your daddy would probably smack ya’, better yet, yes, go tell your dad.)”