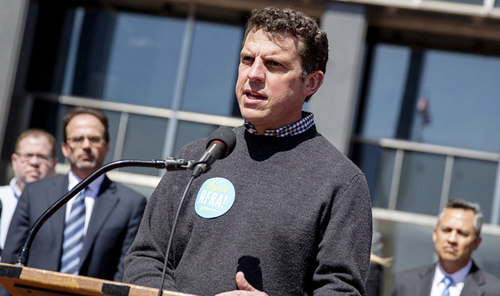 Via the Indianapolis Star:

Bill Oesterle is quitting as CEO of Angie’s List, saying he wants to re-enter state politics and help repair the “shellacking” Indiana’s image took from the passage of the “religious freedom” act. The news caught both the state’s business and political communities by surprise, and some see the move as a direct effort to unseat Gov. Mike Pence over his handling of the controversial issue. Oesterle, 49, co-founded the online consumer review company 20 years ago and has been its only chief executive. He hasn’t been involved in state politics since he managed two-term Indiana Gov. Mitch Daniels’ first election campaign in 2004. Oesterle’s announcement amounts to “an announcement of trying to unseat a governor,” said Andy Downs, director of the Mike Downs Center for Indiana Politics. “If you think about the individual positions that could have made a difference about this (RFRA), that’s only one, that’s the governor.” “That is somebody who is saying either he is running for governor or is looking for somebody to run for governor,” Downs said of Oesterle.

Interestingly like Pence, Oesterle is a Republican and his move could signal a split in the state’s GOP pitting Republican-leaning business leaders against religious conservatives. Pence is up for reelection in 2016.

Rick (Surging) Santorum: “I haven’t been talking a lot about gays”