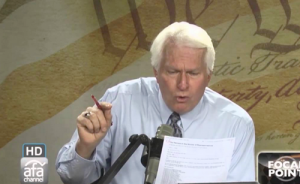 Yesterday American Family Association employee/non-employee Bryan “Grandpa’s Off His Meds Again” Fischer demonstrated  on his radio show that he is stark raving mad when he declared that the anti-gay pizza owners of “Memories Pizza” in Indiana were like Anne Frank.

Think about what you see in the homosexual community,” he said, “and what it tells you about the god that they must worship. Whether they recognize it or not, whether they know it or not, but the god that they worship is vengeful, he is vitriolic, he is venomous, he is hateful, he drives his followers to trap a good-hearted American family in their home, like Anne Frank, in fear of their lives simply for what they believe.”

“So if you turn out to be like the god that you worship,” he asked, “what kind of god must homosexual activists serve?”