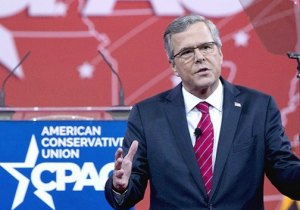 Speaking on the steps of the Georgia Statehouse on Thursday,  2016 GOP presidential candidate hopeful Jeb Bush  came out in support of anti-LGBT bills like the state’s proposed Religious Freedom Restoration Act – legislation that would allow people to use their religion to discriminate against LGBT individuals.

“I don’t know about the law, but religious freedom is a serious issue, and it’s increasingly so, and I think people that act on their conscience shouldn’t be discriminated against, for sure,” Bush said. “There should be protections, and so, as it relates to marriage equality — and that may change, the Supreme Court may change that. That automatically then shifts the focus to people of conscience, and, I don’t know, have their faith make — they want to act on their faith, and may not be able to be employed for example.” […]

According to the Atlanta Journal Constitution, Bush added, “People have a right to do that, just as we need to be respectful for people who are in long-term committed relationships. Sorting that out is important.”