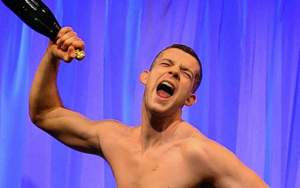 “I feel like I could have been really effeminate, if I hadn’t gone to the school I went to. Where I felt like I had to toughen up. If I’d have been able to relax, prance around, sing in the street, I might be a different person now. I thank my dad for that, for not allowing me to go down that path. Because it’s probably given me the unique quality that people think I have. I get told, a lot, that I’m kind of carving my own path. That there are not many actors who are out and are able to play straight, and gay, and everyone’s OK with it.” – Looking star Russell Tovey, speaking to he Guardian..

Could have?  Come off it Tovey you are definitely not the butchest gay in the village.

2 thoughts on “HBO’s “LOOKING” Actor Russell Tovey: “”I feel like I could have been really effeminate” – Could have?”