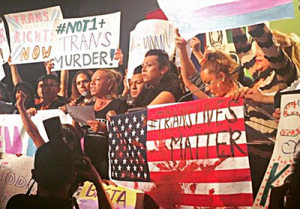 At the NGLTF,  aka Task Force, aka National LGBTQ Task Force’s Creating Change conference last night  in Denver, CO  a large group of transgender advocates stormed the stage in protest of the recent killing of a Latina trans teen by the Denver police.  The trans-teen Jesse Hernandez was driving a car that was reported stolen with at least two friends when she was confronted by officers. She allegedly drove the car toward one of them. Officers responded by firing several shots into the driver’s side of the vehicle, killing Hernández.

Task Force deputy executive director Russell Roybal and Creating Change director Sue Hyde welcomed thousands of attendees at this year’s conference in Denver Thursday evening, and both showed emotion as they remarked upon the death of queer Latina Jessie Hernandez. Last week, Hernandez was fatally shot by police fire in Denver in a car authorities report was stolen. After Hyde and Roybal introduced the evening’s emcee, comedian Kate Clinton, a group of trans activists and allies, led by Bamby Salcedo, stormed the stage with dozens of handmade signs as the chant “Jessie Presente!” filled the ballroom”.

The transgender activists also were demanding increased support from the LGBT community in general to aid in their quest for equality. While there were several demands made from the stage by Salcedo, all coalesced around the statement “We are here demanding intentional, meaningful investment in our community.” Trans activists and supporters chanted “We are fighters.”  he protesters were calling LGBT organizations to task for a perceived lack of investment in the trans community.

Now I and everyone  I know have always promoted trans-equality.  But what really makes me wonder about the trans-movement is: What exactly was the point of disrupting a pro-equality conference where you are already fully supported to demand support?  This doesn’t make the general public any more aware of your problems  and you’d  be hard pressed to find anyone in the Creating Change crowd that doesn’t support you.

The trans=activist last night chanted that they are ” fighters”.  GO OUT AND FIGHT!  We have your backs.  We’ll even help. But go out and fight against those you need to.  WE ALREADY SUPPORT YOU.

Some personal advice.  Stop worrying about being on a Gay Inc. Board of Directors and get your asses out to City Hall and protest.

Don’t protest the very people who stand up for you already. Thats the easiest way to push people away.

And that’s already been happening.

We won’t even go into the fact that the  member of the trans-community they were protesting for possibly tried to run down and kill  a couple of police officers in s stolen car.

I’ll leave that for the comments section.

The Daily Drool: Chris (THOR) Hemsworth Grunts, Sweats, and Pumps It Up! – Video