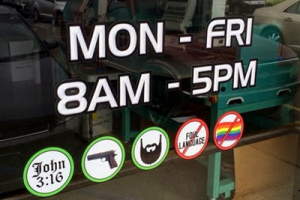 The Indiana Senate Judiciary Committee voted on Wednesday morning 7-0 in favor of controversial and discriminatory “religious freedom” legislation.  None of the committee’s Democrats were present to oppose the measure.

Senate Bill 101 will provide a free pass to people and businesses with supposed strongly held religious beliefs to be able to discriminate against serving the LGBT community.

The “Right To Discriminate” Bill now moves to the Senate, where it is expected to gain easy approval from the Republican super majority.

The Human Rights Campaign has not replied to queries by this website at the time of posting if they will lobby against this Bill.  (And I won’t hold my breath)

You can read the full Bill HERE