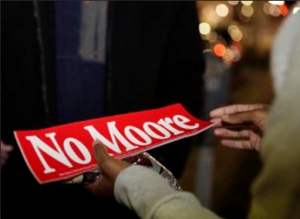 “The U.S. district courts have no power or authority to redefine marriage. Once you start redefining marriage, that’s the ultimate power. Would it overturn the laws of incest? Bigamy? Polygamy? How far do they go? A lot of states in this union have caved to such unlawful authority, and this is not one This is Alabama. We don’t give up the recognition that law has bounds. I disagree with standing in the schoolhouse door to prevent blacks from getting equal education. We’re talking about a constitutional amendment to preserve the recognition that marriage is one man and one woman, as it has been for centuries.” – Alabama Supreme Court Chief Justice Roy Moore, speaking this afternoon to NBC News.