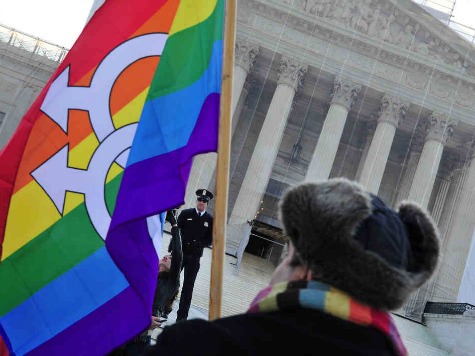 Statistics via The Williams Institure:

• As of today, more than three-quarters (75.8%) of same-sex couples across the country are living in the 36 states where they can marry and more than seven-in-ten (70.4%) Americans are living in states that allow marriage for same-sex couples.
• Williams Institute research suggests that there were 690,000 same-sex couples in the US in 2013 raising an estimated 200,000 children. As many as 30,000 of those children are being raised by married parents.
• Recent Williams Institute analyses suggest that the number of married same-sex couples, estimated to be as high as 130,000 in 2013, has increased by more than 50% over the last 3 years.
• Fourteen states, home to nearly 30% of the US population, (AL, AR, GA, KY, LA, MI, MO, MS, ND, NE, OH, SD, TN, TX) and Puerto Rico continue to enforce bans on same-sex marriage.
• In 2014, courts prohibited nineteen states, home to 32% of the US population, from enforcing their bans on same-sex marriage on federal constitutional grounds (AZ, AK, CO, ID, IN, FL, KS, OK, OR, PA, NC, NV, MT, SC, UT, VA, WI, WV, WY).

Executive Vice President for External Affairs, Winnie Stachelberg, issued the following statement today after the announcement that the U.S. Supreme Court will make a decision on marriage equality in the coming term.

The Supreme Court’s decision to again take up the issue of marriage equality is welcome news to the thousands of loving and committed same-sex couples who seek a resolution to the cruel legal limbo that currently denies them the dignity and respect that all families deserve. We are confident that when arguments are heard, the Supreme Court will affirm that the fundamental right to marry is the right of all Americans, regardless of the person they love or where they live.

The U.S. Supreme Court today announced it has granted review of all six marriage equality cases decided by the Sixth Circuit Court of Appeals, including two Ohio cases litigated by Lambda Legal, the ACLU and Gerhardstein & Branch. The two cases are Henry v. Hodges, where Lambda Legal joined Gerhardstein & Branch, and Obergefell v. Hodges, where the ACLU joined Gerhardstein & Branch. Oral argument is expected to take place later this year. “After years of struggle and the dedicated work of thousands across the movement, we are finally within sight of the day when same-sex couples across the country will be able to share equally in the joys, protections and responsibilities of marriage,” said Jon W. Davidson, Legal Director and Eden/Rushing Chair at Lambda Legal. “While these cases will carry the marriage standard before the Supreme Court, they represent literally dozens of cases in state and federal courts nationwide and the collective effort of Lambda Legal, NCLR, the ACLU, GLAD, and other sister LGBT groups and private (often pro-bono) counsel dating back years.”

The American Civil Liberties Union and Stanford Law School Supreme Court Litigation Clinic are co-counsel in the two Kentucky cases, Bourke v. Beshear and Love v. Beshear, brought by lawyers at Clay Daniel Walton & Adams and the Fauver Law Office. These cases challenge Kentucky’s anti-marriage laws on the ground that they violate due process and equal protection provisions of the U.S. Constitution. The ACLU along with Lambda Legal and Gerhardstein & Branch are also co-counsel in the Ohio case, Obergefell, et al v. Hodges. “We are thrilled the court will finally decide this issue,” said James Esseks, director of the ACLU Lesbian Gay Bisexual Transgender & HIV Project. “The country is ready for a national solution that treats lesbian and gay couples fairly. Every single day we wait means more people die before they have a chance to marry, more children are born without proper protections, more people face medical emergencies without being able to count on recognition of their spouses. It is time for the American values of freedom and equality to apply to all couples.”

Just a quick note to people because no other site is reporting this part. But don’t be too overjoyed yet.

Remember, if SCOTUS decide against us, we lose all the other wins in federal court. Only state laws which were changed to stop blocking our right to marry would stand.

Any declarations of victory now could turn into the equivalent of “Dewey Defeats Truman” in 1948.