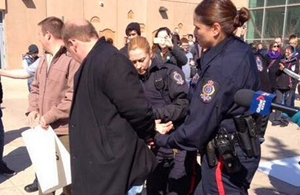 Last Friday, LaBarbera had been detained and initially barred entry into the country — based on the belief he might violate Canada’s hate speech laws — after officials learned he is the head of a U.S. anti-gay hate group. He was later allowed to enter the country after appealing the ruling of Canadian customs officials.

LaBarbera had attended a small, local anti-choice conference wearing a tee shirts that read, “No to hate crimes against Christians who disagree with homosexuality,” and was later arrested and charged with “mischief”

Before their arrival, the university issued a news release saying the pair (LaBarbera and fellow anti-gay activist  activist Bill Whatcot) would be monitored to ensure they did not engage in any activity that would promote hatred.

At one point, with news cameras rolling, an unidentified university official approached Whatcott and LaBarbera and asked them to leave. During that encounter, Whatcott said he had attempted to get permission to set up an information table and, since he was denied, proceeded to set up a table anyway.

“I’m not leaving,” Whatcott told the official, “You guys are intolerant and should be ashamed of yourselves for shutting down our message without even considering it.”

A short while later, several Regina police officers arrived and Whatcott and LaBarbera were handcuffed and taken off campus.

“The idea that you can’t have an open debate on homosexuality on a college campus and some speech code is brought in, to kick people off … seems to me to be pretty undemocratic,” LaBarbera said

Students and onlookers cheered as LaBarbera was arrested and led away by police.

Are there lions in Canada? They should really get some.