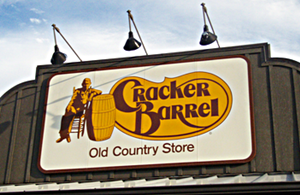 It took less than two days for southern restaurant chain Cracker Barrel to put the “cracker” back in its name after  pledging too pull Duck Dynasty merchandise from its shelves, and now the company reversing its decision

In a Facebook post, Cracker Barrel — the first major retailer to take a stance on Phil Roberston’s controversial statements — said it would continue to sell some Duck Commander merchandise but would continue to evaluate the products.

“When we made the decision to remove and evaluate certain Duck Dynasty items, we offended many of our loyal customers. Our intent was to avoid offending, but that’s just what we’ve done,” the company wrote in a Facebook post. “You told us we made a mistake. And, you weren’t shy about it. You wrote, you called and you took to social media to express your thoughts and feelings. You flat out told us we were wrong.  We apologize for offending you. We respect all individuals right to express their beliefs. We certainly did not mean to have anyone think different.”

In their original statement when they pulled some DD merchandise  Lebanon, Tenn.-based restaurant company said they were concerned that the DD products might offend some of our guests.  But obviously knowing that they cater to the same white trash customer base as Duck Dynasty does Cracker Barrel chose money over doing what was right.

1 thought on “Cracker Barrel Reverts Back To “Cracker”, Puts Duck Dynasty Products Back On Shelves”