Recently I introduced my good friend and LGBT activist/straight ally Liza Derrick of FireDoglake’s La Figa to Leon Accord the DILF-Y writer/creator/exec. producer of the award-winning hit web TV series Old Dogs & New Tricks the popular web series that asks: In a place called Boystown, do gay men ever grow up…or do we just grow old? Leon who was who was busy planning their Halloween episode which will be their first episode of their upcoming Season 3 invited Lisa to the set and even let her join in the fun on camera.

Lisa,had a blast and sent back the following report: 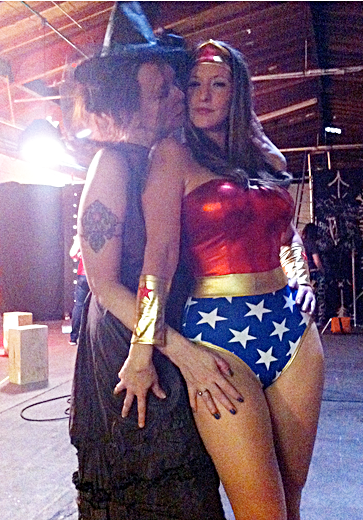 Just a few days before Halloween as Los Angeles geared up for its annual gianormous Halloween celebration–half a million people expected, Queen Latifa getting crowned as Carnaval Queen(!), and, oh my gods, the horror, the horror of resident permit parking suspended for the night–I celebrated early, on the set of Old Dogs & New Tricks, the fabulous web series about the friendships and tribulations of a group of diverse and successful West Hollywood men – each one located squarely within middle age. (I have a super soft spot for ODNT who donated DVDs to give away at Netroots Nation 13 LGBT Connect booth

The old dogs and their new tricks were shooting a special Halloween episode in set in disco with pulsing music, hot go-go boys, and costumed extras drawn from their friends and friends of friends. So, thanks to the master of Back2Stonewall.com I threw on a gown, afixed my witch hat firmly on my head, and headed to the top secret location to join my fellow revelers and dance the afternoon away.

I don’t want to give away too many plot points, but expect some awesome costumes and rippling muscles, an appearance by “Barack Obama,” fine drag served with a side of melancholy from one of the series’ stars, Leon Acord–and if it made the cut, me in a Sapphic embrace with Wonder Woman no less.

Old Dogs & New Tricks has also just signed a licensing deal with LGBT film distributor Wolfe Video to release Season 1 and Two of the hit comedy series on DVD  (They are that good!) and via various streaming platforms online beginning November 26.

John Barrowman and The Kaleidoscope Trust Ask: “Imagine If It Were Illegal To Be You” – Powerful PSA Video