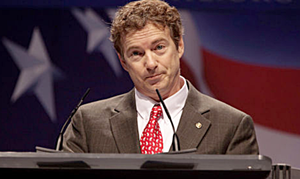 As if the Employment Non-Discrimination Act (ENDA) did not have enough problems with religious extremists and a gaping religious exemptions clause that renders it almost useless and would give religious organizations, schools, hospitals and businness a free pass to continue discriminating LEGALLY against the LGBT community.  NOW we have Senators Mitch McConnell (R-KY) and Sen. Rand Paul (R-KY) trying to attach a national so-called “right-to-work” law to the Employment Non-Discrimination Act.  The two filed an amendment attaching ENDA to the anti-union measure hours before it passed the key hurdle of cloture on its way to its to the  floor debate and vote.

The idea behind right-to-work laws is much more complicated and deceiving than the name suggests. The laws prohibit unions from requiring dues payments from all employees in a unionized workplace. That creates a free-rider problem whereby workers who stand to gain higher wages and better job conditions from a successful union contract bargaining effort can refuse to help pay for those efforts. While the laws are often billed as rescuing workers from being forced to pay union dues, it weaken unions, and drives down wages. Workers in right-to-work states like Michigan and Indiana make about $1,500 less per year than those in other states and workplace safety and health insurance benefits are much weaker according to studies of the 22 states that operate under the policy.

Dirty GOP politics and corporate greed at the expense of civil rights and the well being of American citizens.

THAT is the Republican party