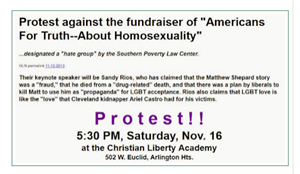 Just like the Illinois Family Institute, American for Truth About Homosexuality has also spread lies to attack the rights of the LGBTQ community; the group has accused gay people of being pedophiles as well as murderers who are responsible for the AIDS crisis. The group has also pushed propaganda claiming that the gay rights movement has led to totalitarianism. Groups like the Illinois Family Institute and American For Truth About Homosexuality who continue to attack teachers and public education because they think that teachers are “brain-washing” children to support the “homosexual agenda.”

So go! Have fun! Bring Pete some of his favorite leather magazines.

Sen. Mary Landrieu: I Support Gay Marriage Personally NOT Publically, I Might Get Voted Out Of Office