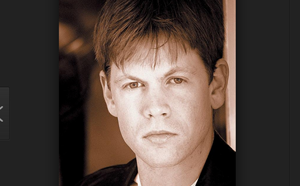 Christoper Rice, the New York Times best selling writer and openly gay (SMOKING HOT) son of Anne Rice has released the trailer for his soon to be released new novel The Heavens Rise.

The book goes on sale October 15th. But if you pre-order a copy now and e-mail your receipt to theheavensrise@gmail.com, you will receive a signed copy of an original manuscript page featuring author notes.

hardcover or the Kindle edition of The Heavens Rise

by using the links!