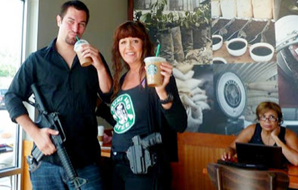 After Tea Party and NRA lunatic’s have co-opted Starbucks stores around the country by enjoying Low-fat Venti Mocha Lattes while opening carrying guns at what they call Starbucks Appreciation Days because it’s current store policy had been to default to local gun laws, including “open carry” regulations.  Starbucks has had enough and is changing it’s policy and telling them to keep their guns out of its stores.

In an interview, CEO Howard Schultz said the decision to ask customers to stop bringing guns into stores came as a result of the growing frequency of “Starbucks Appreciation Days” in recent months, in which gun rights advocates turn up at Starbucks cafes with firearms. Last month, for example, the company closed down a store in Newtown, Conn., for the day after learning that gun rights advocates planned to hold a “Starbucks Appreciation Day” at the location. The store was near the school where a gunman killed 20 children and six women. Schultz said the events mischaracterized the company’s stance on the issue and the demonstrations “have made our customers uncomfortable.”  Schultz hopes people will honor the request not to bring in guns but says the company will nevertheless serve those who do. “We will not ask you to leave,” he said.

Peet’s Coffee and Tea and California Pizza Kitchen ban guns from their stores altogether. Disney also forbids guns in its theme parks, and Costco does not allow its members to carry them openly in its stores.

Starbucks will publish full-page ads in major newspapers tomorrow to publicize their request.

In my opinion, you see someone walk into a Starbucks or any other store with a weapon, everyone should start calling 911 to report a madman with a gun.

Because that’s what they are.  Madmen.

Rush Limbaugh On The Same Sex Marriages At The Grammys: “It was horrible, it was despicable.”