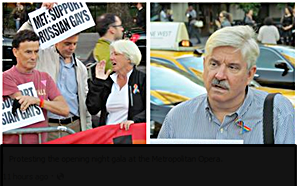 Queer Nation and LGBT activists in New York City descended on the Metropolitan Opera’s Opening Night Gala last night demanding that pro-Putin Russian performers at the Gala—and the Met itself—end their silence on the Kremlin’s attacks on LGBT Russians.

Russian conductor Valery Gergiev and soprano Anna Netrebko, who appeared in the Gala production of Eugene Onegin, which was written by the gay composer Peter Tchaikovsky, are longtime and vocal supporters of Vladimir Putin, Russia’s president and have refused to publically denounce Russia’s recent draconian anti-gay laws.

Before the performance Queer Nation NY and LGBT activists including longtime LGBT journalist Ann Northrup and Andy Humm (pictured above) peacefully protested outside of the opera house carrying rainbow flags and signs.

Security led the protesters peacefully out of the opera house.

There were no arrests.

Singer Anna Netbrebko later wrote on her Facebook page: “As an artist, it is my great joy to collaborate with all of my wonderful colleagues — regardless of their race, ethnicity, religion, gender or sexual orientation. I have never and will never discriminate against anyone.” But stopped short of denouncing Russia’s anti-gay laws.