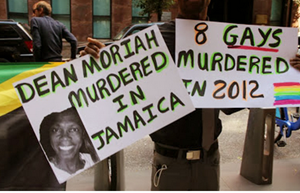 Shouting “Gay rights are human rights!” and “Portia, shame on you!” the group of seven protestors greeted the PM as she began to exit the Ford Foundation offices on East 43rd Street in Manhattan. Simpson-Miller stopped, waved at the protestors and blew kisses, then went back inside the building. Protestors paced the sidewalk outside the Ford Foundation for one hour with signs reading “Eight Gays Killed in 2012” and “Portia Protect Gay Citizens.” The group called for an end to Jamaica’s anti-gay laws, which tacitly condone attacks and murders of members of the LGBT community in Jamaica. Consensual sexual intercourse and interaction between homosexuals has been illegal since 1864. Gays are imprisoned for 10 years with hard labor under Jamaica’s Buggery Law and often brutalized and killed by anti-gay mobs if caught or suspected.

Listen up travel agents and tourist.  Its time to chat up any other Caribbean destination and send your clients elsewhere. Its time to prove to Jamaica and their smug b**** of a leader that Jamaica’s ahte towards LGBT people is not tolerated.